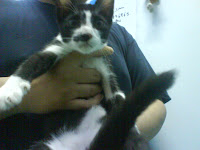 Sylvester is a cross-breed between a Persian and a Burmese cat. He’s black and white and one of Aswat’s customers christened him Sylvester because he’s lanky and black white just like the cartoon character Sylvester.

Sylvester has been at Angels Pet Shop for a while. He is such a poor thing… he was originally from a litter of kittens that the mother’s owner wanted to dump at the market, but Aswat told that owner not to, and he would help to find them homes. (And also told them to please sterilize their cats, but well.) His siblings have all been adopted.

Initially Sylvester did find a new home. But the owner saw Sylvester playing with her own kitten, and complained that the ‘kittens are slapping each other’. But they were just playing! Obviously not an owner that knows the play body language of kittens. So Sylvester was returned to the shop.

He was then taken in again by another owner. But the owner suddenly changed their minds and wanted a pure Persian kitten instead (not available at the shop at this moment). And then returned Sylvester again.

Sylvester has been rejected twice! And it’s not his fault.

He has a very old-worldly charm to him. The Burmese cat is dominant in his physical appearance, hence he is like other local cats – short haired. He’s affectionate once he gets to know you, enjoying a cuddle and loves to sit on my lap or cling to my chest, and generally very agreeable. He is not overly manja nor vocal, which is good for some people. But he loves to play! He enjoys playing with other kittens. When Tabby cat first came into the shop, she was at the time unsocialised and reserved, keeping to herself. But Sylvester broke the ice and started playing with her, initiating her into the group. Now Tabby enjoys climbing the cage walls even more than Sylvester, who loves to climb too.

He doesn’t complain much, even when we had him dress up for a photo shoot! 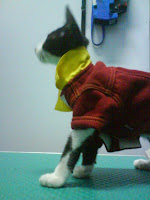 More updates and pics on Sylvester soon. Meanwhile, enjoy! And spread the word! Sylvester is growing up soon, and if he cannot find a new home, he will probably have to be sent to SPCA.