One of the stray kittens in the area is sick and was spotted by Auntie Can. When brought to the vet, it turns out that this poor kitty has symptoms of jaundice. The vet took an x-ray; the kitten has been found to have a liver problem. 🙁

This kitten is already very small-sized compared to his siblings. And he has a disabling limp from a car accident not too long ago.

He has been put on a daily antibiotic by the vet, and is now resting at Angels Pet Shop.

Looking at him makes me feel sad… 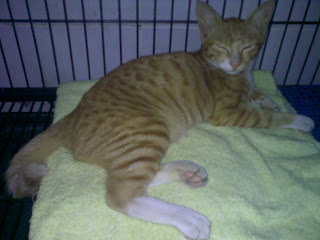 Come to think of it, doesn’t he look a bit like Hobbes from Calvin and Hobbes? We are not sure what caused the liver problem. Apart from obesity, liver problems in cats are most likely caused by the ingestion of toxic plants, chemicals or medication. The only thing I could come up with was that the poor kitty might have picked it up from eating leftover food – and alcohol – from the foreign workers who often gather to eat and drink in that area. I do hope that it is not that serious; seeing that he did not have to be hospitalised and put on an IV drip, I hope that his liver problem is curable. His medical fees have already cost a bomb.

Eventually, unless someone adopts him, he will be put back to his territory. But for now, he is resting at Angels and I secretly do hope someone can take care him properly for the rest of his life – having a limp and being undernourished drastically reduces his chance for survival as it is.

When he is well, we hope he will be back to his usual self – affectionate, gentle, active (despite his limp, he still can walk). He reminds me of Sayang when we first took her back from Angels after a similar rescue story.

If you have room in your heart and home for him, do contact us.