On Saturday night Aswat found a small young kitten abandoned in the garden area in our neighbourhood. We know it was dumped there, because there are no female cats in the area that are not sterilised, and we have never seen this kitten before.

Only about 5 weeks old, he was found extremely skinny, and very dirty. It seems as though he has been scrounging around in rubbish as his face area was black, and his paws looked as if he had been trodding on cigarette ash.

Because the cats in the pet shop are not feeling well and because there are already a lot of homeless cats there, we decided to foster this kitten.

He was really very dirty, here is our sink after we showered him: 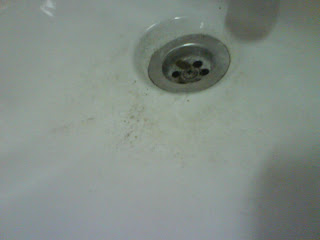 After showering him, twice, and cleaning his paws and ears, we wrapped him in a warm towel (heated up from the microwave). Here he is snuggled in our cat carrier. 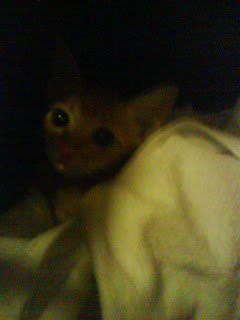 He is totally orange with tabby markings, and a small bib of white fur. His eyes are Oriental ( slant-eyed as opposed to round) and his face is triangular. His tail is short, about half the length of a normal cat-tail.

Looking at him when he first came, it really broke my heart. He is so skinny and was even shivering when we had to shower him, even though we used hot towels. He looks at us as if he is trying to convey to us that he is really grateful, and wouldn’t fall asleep until I tucked him in and left when he dozed off. In fact, while he was sleeping, I saw him moving his paws and mouth as if kneading and drinking milk. He must miss his mommy. When it is our bedtime, he chooses to sleep next to Andy or me.

We observed him to see if he was sick. He has no flu or fever, but was merely dehydrated and starved. He doesn’t even have fleas or ear mites, though just in case, we used a small portion of flea shampoo to bathe him, and baby oil to clean his ears. He has no visible injuries. And he has a good appetite. In fact, unlike Scooter, he enjoys dry food, which makes him really easy to feed.

Today, I just dewormed him, as he has been having diarrhoea since last night, plus he is very skinny and weak, likely to have worms. Thankfully he is fully litter-trained already, and has not pooed anywhere but the cat toilets.

He has this really gentle personality. When we first fed him, he meowed before he ate, like as if saying, “Wow! Yummy! Thanks!” When the cats in our house were hostile upon his arrival, he did not exhibit any kind of anti-social behaviour by hiding in weird spots, or shitting everywhere, or breaking things. He just sits still, allowing the other cats to scope him out. When cleaning him, or cutting his nails, or feeding him rehydration fluid etc., he doesn’t struggle, and gently complies. By today, we no longer need to keep him inside the carrier to separate the cats. He is now playing happily with Scooter.

While he is staying with us, I have decided to name him Sammy. I found a cat collar too, to put on him so that we can find him easily with a bell – being so small, and the same colour as our floors.

Sammy and Scooter are different in personality, even though both are kittens with just one month apart in age. Scooter is aggressive and likes to growl a lot, is picky with his food, and he is extremely big-sized for his age. Sammy is gentle and less vocal, and plays less rough, and is very easy-going when it comes to food and bad tempers from our cats.

Can you tell that I have already fallen in love with Sammy?

Andy says we cannot keep him, that 3 cats is really the max for now, otherwise the other cats won’t get enough attention from us. My chief concern is Sayang: Scooter is her playmate, and she is very needy when it comes to attention and affection. So for the past few days I gave her some one-to-one time, playing with her alone, or cuddling her, and that made her happy. I also gave her some pet milk to drink, on top of her meals. She has come to tolerate Sammy’s presence already. Slinky is quite oblivious to Sammy, having already observed him and given him one of her Slinky-hisses. But Slinky being Slinky, she cannot really be bothered by Sammy at all, even when they play around her as she lies down to snooze.

Sammy is really special, and he needs a really caring human owner. Contact us if you are interested.