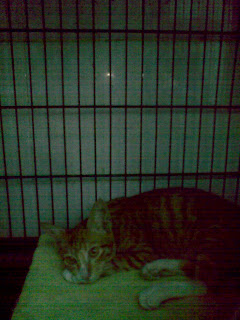 “I am sick, but I think I might get better. I can run even though my leg is broken! But I am scared of those mean looking cars, they break my leg. Mew.” 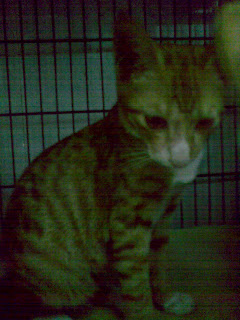 Today we went to visit Hobbes again. He seems to be peeing a lot, which is a good thing for the liver I guess. He is still weak but was able to eat the homemade food we brought him.

Hobbes’ brother also came to the shop, because he has flu and is on medication. His brother is livelier, meowing hello and wanted to be near us. It seems like this family of kittens is very sociable, which is very unlike their mother.

Both of them are extremely skinny, literally just fur and bones. Luckily they both ate a lot of the food I cooked for them.

Here they are, Hobbes in front, his brother behind: 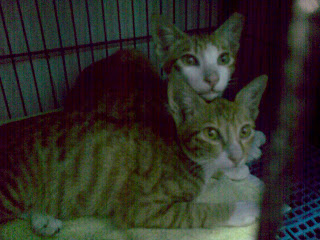 When his brother is okay he will be returned back to his territory, which from the looks of it will be soon. As for Hobbes, we hope he pulls through, and if there really is no one who wants to adopt him, he will also return to his shared territory with his brother and mother. Both his brother and mother are already sterilised; Hobbes was not taken in for sterilisation because he is still very weak and small.

Their territory by the way is behind Blk 301, in the drains and rubbish collection areas. The bicycle shop owner leaves some food and water for them in the back and that is where they hang out. Behind this block is the car park, which is probably where Hobbes got into his car accident and got his leg permanently injured.

We are not having high hopes on Hobbes finding a home, and to place him back in the car park may be the only option left, when he is well again.