One of Ali‘s house’s cats Cantik, passed away over the weekend. 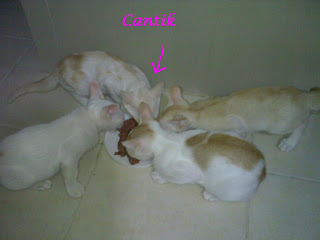 Ali is saddened by his favourite kitten’s passing. He is also a bit cheesed off by the fact that his cat, who initially only had flu when he brought her to the vet, did not become better but instead grew worse after the visits.

We asked him which vet he visited. The residents in our area often bring our animals to Telok Kurau Animal Clinic. There are three doctors there: Dr Hsu (only there on Mon and Fri) who is our favourite as he is good with all animals, Dr June, who does not seem to have very good reviews, and a male Dr Loh. It may have been a locum doctor who treated Cantik, or Dr Loh, we do not know.

Ali’s cat household is now down to 5 cats. Cantik will be missed.