Some time ago, a family in Ubi dumped their pedigree cat onto the neighbourhood, making her a stray cat. She is a chocolate Burmese cat, and she produced a daughter, a chocolate tortoiseshell cat who roams the blocks not far from her.

This tortoiseshell cat recently gave birth to 2 kittens. We chanced upon them one night when we were feeding the strays in the neighbourhood because Auntie Can was unable to make it that night for her usual feeding routine.

We realised that the tortoiseshell cat must have given birth outside one first-storey flat, which is situated just next to the car park. At first, we thought that the family owns the tortoiseshell cat with her 2 kittens, but after monitoring them for a few days, we realised that they are in fact strays. The family on the first floor had placed a water and food bowl for these strays.

However, the danger was that the kittens were constantly roaming about in the adjacent carpark, and being young, they had no notion of danger which could come from passing traffic.

Which is why, after monitoring them, Aswat decided to rescue these kittens to prevent any traffic accidents or illness in the kittens. They are now boarding at Angels Pet Shop.

One of the kittens is a chocolate torbie we call Patches. She has the most adorable fur, like a teddy bear, and is very agreeable in temperament. Her fur is thick, which makes her fluffy face really snuggable. 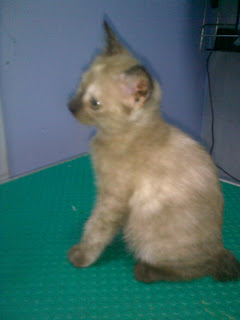 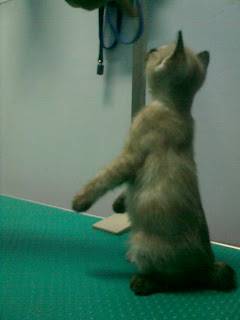 Her sister looks just like Spotty from the neighbourhood! Her fur is thick just like her sister, the only variance being that her colouring is totally unlike a Burmese cat, being white and black. We like white and black! Slinky and Sayang are of the same colouring and we love the way the white is so soft and the black so shiny. Mini Spotty is extremely active and strong-willed, which is particular of Burmese genes. 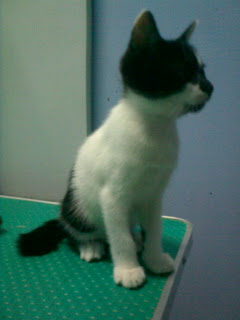 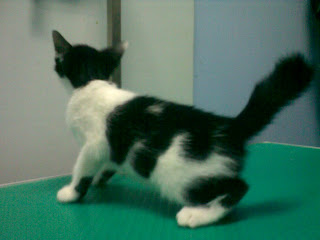 Both cats are healthy and are about 6 weeks old now. They need very little grooming as their fur, while thick, is short, like their grandmother’s and mother’s. They have been boarding at Angel’s for a while now, eating Royal Canin Kitten 36, and Bistro canned food. They have also been toilet trained.

If you would like to view and adopt these second generation cross-Burmese kittens, do contact us. A small token would be appreciated for Aswat who has been feeding and cleaning up after them.