As promised, another cat abandonment story.

There is this silver semi-long fur cat that was dumped outside a flat once. She gave birth to a litter, and also ended up fostering some other abandoned kittens that were anonymously dumped to her. She had to nurse all these kittens, and was very skinny. All the kittens came down with flu, and were terribly ill-looking.

Eventually, someone decided to adopt the kittens and the silver mommy.

However, she has been sighted again, dumped for the second time, and probably because she was pregnant again. She has just given birth again not long ago – the kittens are about two and a half weeks old. She was dumped outside the flat she used to hang out when she was dumped for the first time. It is likely that this flat’s residents are the original owners of Silver.

This round of kittens, we spotted 5 of them at first. But now, mysteriously, only 4 are left. Apparently there were previously 6 of them. 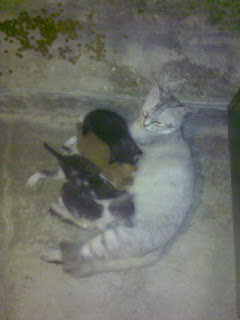 She has inadequate supply of fresh water outside this first floor flat and both she and the kittens are falling ill again. We will be bringing her water and probably some rehydration fluid for her tomorrow, as well as some eye drops because their eyes are infected (sign of dehydration or flu). Unfortunately there is no boarding space at Angels at the moment so we have to monitor her health and her kittens nightly when we go visit.

Most of the kittens are semi-long fur just like Silver mommy is, especially the black and orange ones. The one that is missing has lilac and cream markings on white fur, also long fur. We do not know who has taken it.

They are living near the carpark as this is a one-storey flat they are residing outside of. There is also a lot of human traffic. We spotted one night a kid nearby who, likely to have some behavioural problems, was shouting loudly in the night and purposely stepping on the cat food we left for Spotty Jr and Patches’ grandmother, who lives nearby. A cat-feeder has also spotted that the cats are becoming more and more endangered as they are living there for the same reasons. If the kittens have been taken to a loving home – and we hope so – then so be it. What may be the case is that children take the kittens away to play with them and dump them again elsewhere. 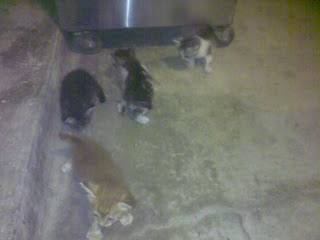 We hope to rehome the kittens, as well as Silver the mommy, soon. At least this time around, although she is still skinny, she is less skinny than the last time she gave birth. And her kittens are still healthy, and they have really fluffy long fur, much better chance at finding a safe home eventually.

Edit: More on Silver here, and on her kittens here, here and here.