I received a very heartwarming email today from Julie, of the family that adopted the chocolate Siamese kitten found abandoned outside Angels Pet Shop.

Here is what she has written:

My husband and I adopted the little female Siamese chocolate point who was dumped by your store on July 16. We have named her Persephone.

I just wanted to send you an update on how she’s getting on. First she went to the vet for a thorough exam, and was pronounced very healthy. She’ll be going back in several months time to be sterilised, and she will always be an indoor cat in any case.

Then we brought her home. She has settled in beautifully and after some initial reservation, has made great friends with our older cat, a female Egyptian Mau called Iolanthe.

Together, they play all day, chasing each other and showing off in front of each other, and sharing their toys. Persephone tries to do everything the big cat does, but sometimes her little legs just aren’t big enough, which doesn’t stop her giving it her best shot anyway – she is very game! When playtime is over, Iolanthe grooms Persephone; it’s very sweet to watch.

Persephone is very loving, clever, and social, and follows both of us round the condo, talking to us. She has a lot of opinions about everything.

She is greedy for both food and cuddles. Dinnertime is her favourite time of day, and she mutters away to herself while she eats as if she’s saying ‘thank you’.

We love her very much already and are so glad you found her and we were able to adopt her. You are all doing such a great job. THANK YOU SO MUCH!

And here are some pics of Persephone! 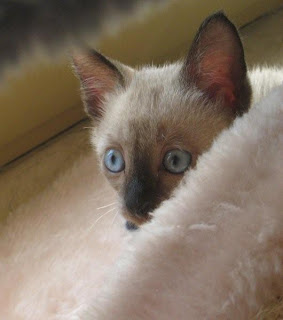 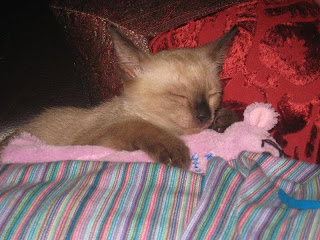 Persephone at home in July 2009 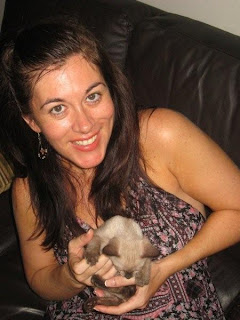 Persephone with her new human Mommy! 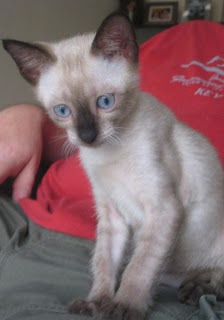 Persephone at home in August 2009 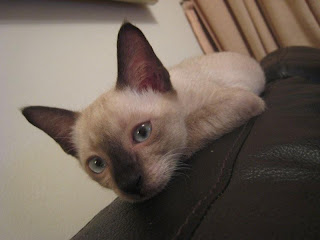 Hanging out at home! 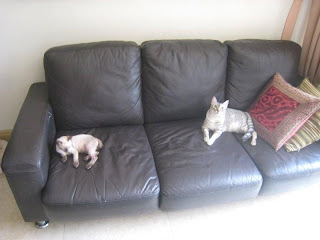 And hanging out together too! Comfy!

Thanks Julie for the lovely update!