Edit: Silver’s owner confirmed she is doing well at home, and going for sterilisation next month.
Berrie’s fosterer replied to let us know more about her. Berrie was found in Teck Whye, which is not Silver’s current home in Choa Chu Kang (yes, Silver’s owner came all the way from Choa Chu Kang to Ubi to adopt her, even waiting while she was nursing to bring her home only after weaning).
Berrie has also been found to be pregnant, which could be why she was dumped. We hope Berrie finds a new home soon, she is really very pretty. Do keep the word out if you know someone who wants a doll-faced Persian that looks just like Silver.

Recently a regular blog reader of ours alerted us that there was a cat on Cat Welfare’s website that looks a lot of like Silver.

We are concerned that it really might be her, and have asked Aswat to check with Silver’s new owner Sam on whether Silver is okay: is she lost? or has she been abandoned again?

I have also sent a message to the fosterer to ask more details on where this cat was found, and if she looks like she was recently nursing.

Will update on Silver as soon as we know.

Meanwhile, here is another picture of Silver that was taken when she was found here in Ubi. 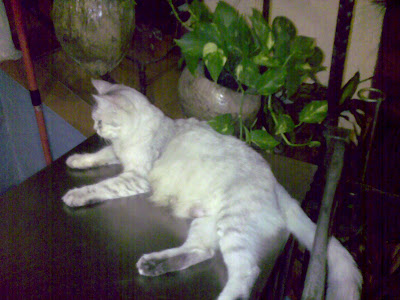