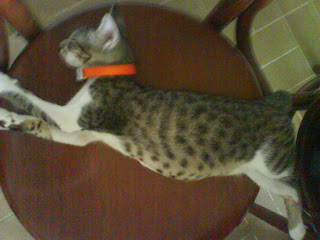 I spend a lot of time admiring Scooter’s physical appearance, and even though he was a stray cat, I try to place his physical characteristics to those found in certain breeds of cats.

Scooter has ticked fur, similar to that of the Abyssinian, meaning that he carries the agouti gene that supports fur with several bands of colour. His ticking has white, red and blue, but gives an overall colour of lilac or bronze, with black tips forming his tabby markings. In the sunlight his fur sometimes gives off a sparkly look. 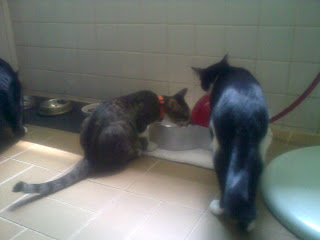 His tabby markings are mostly spotted, with stripes down the top of his back.

He has large pointed ears, which is more Oriental, as well as well defined cheeks.

His eyes are hazel in colour, and his nose leather brick red outlined with black.

His patterning is most similar to that of a tawny spotted Ocicat, which are crosses between Siamese and Abyssinian. The only exception is his white fur.

After all that, he still looks like a stray cat any way you look at it! But we always wanted a tabby cat, and one that is huge and nice to hug. We can’t wait till he becomes really big!