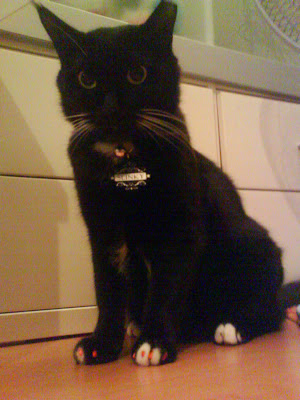 Some time back we got Slinky nail caps for her front claws; well, it was more for ourselves really, so that we won’t get scratched by her when we try to hug her. She hates being hugged and isn’t afraid to lash out at anyone with her claws unsheathed. For a better look at what these pet nail caps look like see this website.

We bought our nail caps at Little Paws @ Telok Kurau for $18/20pcs, in smallest size. There is a variety of colours, you can mix and match. Nail glue provided.

(As usual, we were sold on this product because the resident cat at Little Paws, Queenie, has these nail caps herself and they looked great.)

We first did her pedicure just around the time Scooter arrived in our family. It was quite timely because she did give Scooter one slap, and he survived it.

We had a hard time applying her nail caps because firstly we had to trim her nails, which we had never done for her before until then; she always keeps her nails trim by stropping. Trimming was easy but Slinky hates being hugged and held, wailing in rebellion throughout the whole procedure. It took us almost an hour to get the pedicure done. The pedicure lasted about 2 months, surviving her regular stropping. We had fun watching her try to slap us and yet not hurting from it. It was also very pretty, and every time she walked there was a click-clack noise. Cute!

After the nails dropped off – they fall off naturally as the cat’s nails grow – Andy and I were a tad reluctant to re-do her nails because it was so much effort. Thankfully, Aswat offered to try to do it for us as a favour, and also to try out the application of the caps himself, since he is a pet groomer anyway but had yet to try out such fancy pet-nails before. We brought her out to the shop today; Slinky was his first ‘guinea pig’ to try this product out.

He did it with such knack we were suitably impressed. But of course, he is a pet groomer. We are such amateurs ourselves! Andy helped to clean the shop shelves as an inadequate favour in return. (Grooming of nails at Angels is $5). If ever in future he does bring in this product to his shop, he would be great at doing this for his customers.

These nail-caps come in a variety of sizes, the cat ones being the smallest. They would work very well for dogs too, especially big doggies, because when they pounce or step on you it actually kind of hurts sometimes. For cats, owners can have their furniture not in shreds anymore, and if there are young kids around in the house, the nail caps serve as protection for better kid-cat interaction. It would do very well also for cats that are simply a bit more violent in nature, like Slinky is. For us, apart from aesthetics, we just like the idea of being closer to Slinky without getting ourselves scratched!