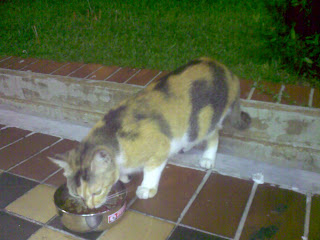 This is Tammy, one of the neutered Ubi strays.

Her story involves one very sad birth of three kittens, which were all killed by a car accident. A previous litter of four kittens were successfully re-homed by Aswat. This was before she was neutered.

She was incredibly hard to trap, extremely human-shy and reserved. But after neutering, she became much friendlier.

This bowl belongs to Tommy, who has been the resident cat at Angels Pet Shop ever since it opened. Tommy was one of the first strays to be neutered in Ubi. 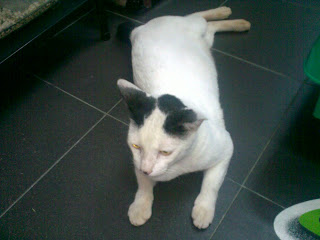 When Tammy visits, Tommy actually gives way to her to let her eat from his bowl. Which is quite unlike him! He is a spoilt cat, picky with his food and hates to be showered or cuddled – Andy has quite a few scratches from forcing cuddles on Tommy. Tommy’s usual activities involve patrolling outside the shop in the day and hiding under cars in the night.