Edit: Salem’s siblings have been adopted; Salem is still looking for new home.

There are three cuties at Angels right now, rescued from abandonment from a household in Bedok Reservoir. Their mother is a Siamese tabby, and their dad is a cross-Persian. Which means they have a quarter Persian bloodline; their fur will be really thick like Slinky’s when they grow up.

They are all black and white in colour, and one of them really looks like Slinky! Like Slinky, he has a white locket and white ankle socks. He is really sweet when we saw him yesterday, grooming his brother, and falling asleep on his feet when he is tired. His tail is like a Japanese bobtail. He also has his mother’s ears: Oriental, pointed and large. He also reminds us of Salem who we rehomed earlier this year. 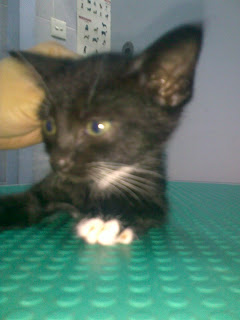 His brother is more white than black, and has cute black nose leather. His tail is slightly longer than his brother’s. He has a black patch on his right arm, making him look like he is wearing a watch! 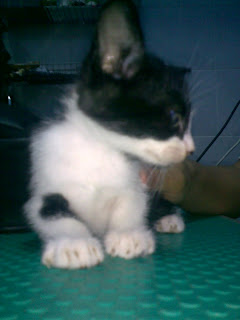 Their sister has colouring like our Sayang, with pink nose-leather, making her really pretty. She likes being stroked and would have wanted to be cuddled if not for the fact that we had to go. This little Sayang has a mid-length tail. 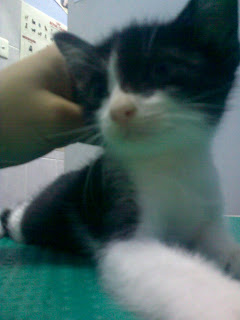 The kittens are about 3-4 weeks old, already starting to eat solid food. They are very skinny when Aswat first found them but they should be putting on some weight soon now that they are on a proper diet of kitten food. They are still rather weak thus not hyperactive, preferring instead to huddle together and sleep. 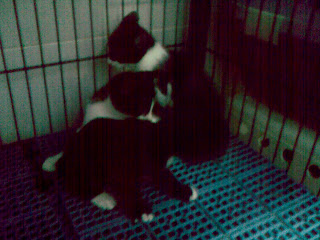 If you are keen on viewing and adopting these kittens, please call Aswat at 9337 8211. They can be adopted singly or together.