Our evening was filled with cats.

First cat incident was discovering a newly abandoned kitten at our block. He is about 4 months old or so and has apparently been roaming around for much of today in the neighbourhood of Ubi. We brought him up to our place where our feeding station is outside our door. He was incredibly thirsty. When returning home after dinner after, we saw him again, still in our block, so at least it would be easier to keep an eye on him. Edit: he is now eating and watering at the bubble tea shop where Skinny is ‘living’. 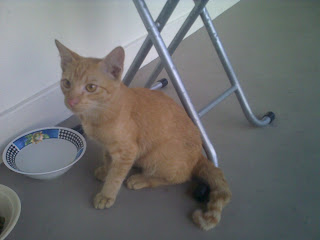 At least he is old enough. We just found out that a cat gave birth at the same block Scooter and his siblings were born – in Ubi cat-zone 2. Young kittens, born as strays, outside a flat.

There is a growing problem in this zone. It turns out that our beloved Squirrel has also gone missing from that area; it seems like someone had put her in a box and sealed it up, and has taken her away. Squirrel is actually Scooter’s much older sister. Already neutered and well fed. But it seems she was still considered a pest and has been disposed of. In fact, Squirrel’s mother and father have already disappeared too, before we could neuter them. The disappearance of this family is really quite sad because I loved and knew these 3 cats – we fed the mother cat all throughout the time she was nursing Scooter and his siblings. But this zone seems to have a lot of cat-haters judging from what Auntie Rose observes. I only hope Squirrel, her mother and her father Tiger did not die a cruel death.

Back to the cat that gave birth – this cat chose to give birth outside a flat in zone 2, and will likely be considered a pest too, she and her three kittens. We couldn’t get to them – mother cat was very protective and we were afraid that if we reached in to get the kittens out, she would decide to up and move her litter away to an unknown locale, possibly even accidentally leaving one or two of them behind. 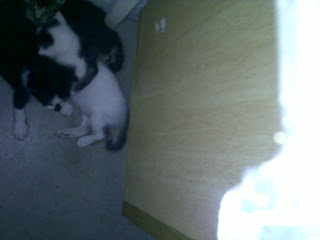 And with Kendra and Salem still at the shop, there is not much boarding space for them to re-home this litter at the moment. This is saddening, seeing something like this and not being able to help much.

The problem is that this zone is under-funded and Auntie Rose, the zone’s main feeder, cannot pay for the full sum of neutering every round. So, we will really have to raise funds for the cats in this zone. More on this in a later post.