Today, in the spirit of bathing, we decided to also give Tommy a bath.

Now, a little bit about Tommy: he absolutely hates bathing. In fact, the times when Aswat tried to bathe him, Tommy would climb up the bathroom door to try and get out. He also hates being hugged, so it would be doubly difficult. And he is not afraid to use his claws on us. But Andy and I versus Tommy is 2 v 1, so we decided to brave it and bathe him.

And here he is after his shower! 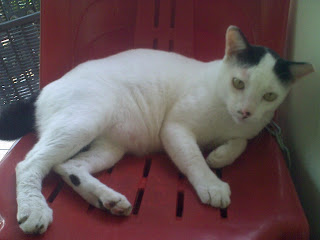 His fur not only looked cleaner, but also fluffier – the shampoo was great (PPP Skin Care Shampoo) and his fur not only looked clean but felt soft. Not long after his bath, he managed to solicit a stroke from passers-by because he looked so much cleaner now. Tommy is usually always dirty because he likes to pick fights with other cats as well as hide under cars, so he had scars and oil stains; his shoulder especially was never really white, but grey instead. Well at least now he can be a living advertisment for the shampoo sold at the pet shop!