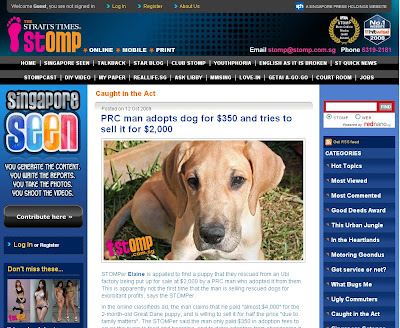 STOMPer Elaine is appalled to find a puppy that they rescued from an Ubi factory being put up for sale at $2,000 by a PRC man who adopted it from them. This is apparently not the first time that the man is selling rescued dogs for exorbitant profits, says the STOMPer.

In the online classifieds ad, the man claims that he paid “almost $4,000” for the 2-month-old Great Dane puppy, and is willing to sell it for half the price “due to family matters”. The STOMPer said the man only paid $350 in adoption fees to cover the puppy’s food and boarding, and to deter adopters from abandoning it again.

In the STOMPer’s email dated Oct 12:

“We recently rescued some puppies from potential culling at an Ubi factory, and after fostering them to proper health put them up for adoption.

“This person who adopted one of the dogs brought him home and subsequently posted this dog for sale online at a profit.

“After much trawling online I found out that this is not the first case of this same PRC male adopting rescued dogs and putting them up for exorbitant profits.

“We will likely be making a police report against this person once we confirm the dog is the same dog we re-homed.”

In an online update dated Oct 10, the STOMPer reported that a man has paid a deposit of $200 to the PRC man and brought the dog home. The buyer later found out about the scam online and will be bring the puppy to the STOMPer for identification.