Update: Jeff is now allegedly helping to find Xena himself too, as atonement for abandoning her.

Zanthe, who also lost a rescued dog – Xena, miniature bull terrier – through Jeff, together with her friends from a dog shelter, spoke to Jeff today. This is what she says:

Xena apparently changed hands not to a buyer who got conned but to Jeff’s mother, because he went back to China for a while.

His mother passed Xena to her friend, and this friend left XENA IN THE RAIN OUTSIDE a printing factory for one night. Printing factory next day took her in and then she ran away after a while.

Not only Jeff, but the man (Mr Loh) who is his mom’s friend clearly didn’t care about the welfare of Xena because HE LEFT HER IN THE RAIN for one night only to be taken in by another kind soul. Jeff and his mother neglected Xena’s condition because they didn’t bother to check with the friend about Xena’s welfare.

Jeff’s mother subsequently called Zanthe up again to plead. Saying that Jeff is psychologically unwell and has along had suicidal thoughts. This is supposed to be an explanation of why he goes around acting the way he does – conning people and abusing animals. She is sorry for how she has brought up this son and hopes that we will have mercy on him. I have told Zanthe to tell Jeff’s mom if she calls again to bring Jeff to the doctor as he clearly needs help.

Regardless, in order to take action against Jeff, we are going to the police to lodge a formal complaint – there are now at least 2 dogs officially involved – AVA will need a formal police complaint to be made in order for them to be able to take action, and likewise there is legislation to prevent cruelty to animals.

Zanthe is still looking for Xena. This is what she looks like. 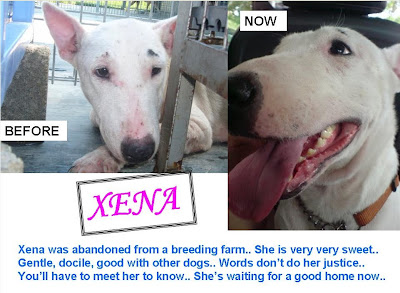