Chek from singaporecommunitycats has offered to help sponsor a cat’s neutering in one of Ubi’s zones. It is extremely kind of him, considering that he is not even an Ubi resident. Kindness truly makes our day!

In case you are wondering about zones, the residential neighbourhood of Ubi is divided into cat-zones, each autonomously managed by different carers, feeders and sponsors. Aswat is sort of the overall in charge of all the zones, liaising between all the zones’ I/Cs. For example, Auntie Can is the sponsor and one of the feeders of our zone 301-306. This cat that Chek is sponsoring is from another zone, fed by an Auntie Doreen and trapped-neutered-released-managed by two old uncles who sponsor and trap the cats themselves. (These two uncles are a bit slower in their zone’s community cats sterilisation as they work alone and raise the money themselves, and the cat traffic in that zone is lower than, say, ours at 301-306.) Their zone is adjacent to Auntie Shirley’s and Pakcik Hassan’s zone – the two of them feed, sponsor and trap the cats for neutering by themselves too. (One day I will upload a map on our Ubi cat-zones to share with our readers).

We call these people our Ubi cat patrons! Feeding and sponsoring neutering is a heavy responsibility on the pocket, and patrons like them really make a difference in our community. Ubi Kuching Project is not supported by any pet companies or vets, and our work is dependent solely on kindness.

This new cat that appeared at block 341 (Ubi has around 50 blocks) is likely to be a newly abandoned cat that is unsterilised. The cost of community cat sterilisation is usually more economically priced if we bring around 4-6 cats at a go, as the transport cost for one or more cats is fixed at the same. So we will likely be rounding up other cats – either within these 2 uncles’ zone, or across the whole of Ubi so that we can neuter a few more at a go. Involving cats across all the zones of Ubi requires more management on our part as different cat patrons will be involved. Aswat, Andy and I do not sponsor neutering ourselves as we only have strength and time to offer instead of money which we are sadly short on. So, going to the respective patrons will be the only way we can get cats across the zones in Ubi to get sponsored.

Edit: This new cat has been sighted today by Aswat Andy and I at last, and we brought it to the feeder in the area to visually verify. It turns out that this cat is sterilised after all! By the family who had dumped her. Doreen pointed out another new cat in the same block that Chek is willing to sponsor instead as this one is clearly unsterilised and already coming on her first heat, picture below of her in typical coming-on-heat position. We will likely be bringing in the sterilised untipped cat for tipping/tattoo, also sponsored by Chek, so that she will not be caught and put down by pest control. 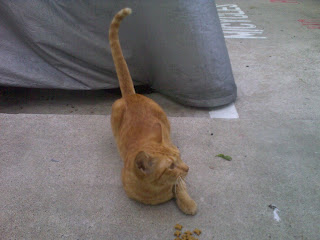 Ubi pet cats can get involved too – for cat owners that still have unsterilised cats in their own homes, we try to encourage early sterilisation for Ubi pet cats too, by allowing Ubi pet owners to tompang their pet cats during our cat neutering cycles, paying for it on their own. This is part of Ubi Kuching Project’s ongoing pet owner education as there are still many who love cats but delay or cannot afford to sterilise their own pet cats swiftly. If you are an Ubi cat owner and would like to get involved in our Ubi cat sterilisation programmes, contact Aswat at 6748 9810 / 9337 8211. The cost of neutering a cat under a joint scheme like this starts at $50 a cat, with additional costs for cats on heat and cats who are pregnant. When we inform you of the date and time we are rounding up the strays in Ubi for neutering, just bring your cat down and then you can collect it 1-2 days after from Angels Pet Shop, which is the HQ for the programme.

Do note that our scheduled cat-neutering programmes when arranged are fixed-timed, and missing one will mean that you may have to wait a long while till the next, during which your cat might have already gotten pregnant (abortion costs more) or contracted FIV from mating with other cats. Also, pet cats joining the scheme means that while the cost is lower, there will be no certificates issued – tattoo or tipped ears only – and your cat can only be collected earliest by the following day. Bringing your own cat for neutering yourself means it is an outpatient affair and you get a certificate, albeit you pay more ($75 for males, $100-$120 for females). Read more on sterilisation of cats here.

So, today, although it is a Sunday, we will be working on planning this particular round of cat neutering, liaising with the various cat patrons, apart from looking after Kendra and Salem at the shop. Looks like some good walking shoes will be needing today as we traverse the blocks of Ubi!