We have been getting a lot of requests for answers on this case. Here are some updates.

Here are some pictures of Dane when he was with us. 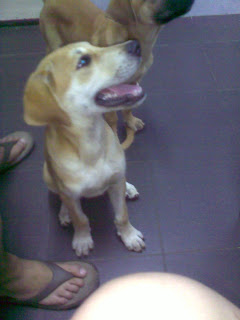 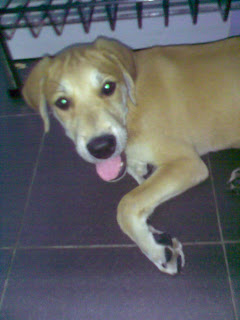 As for how the alleged same puppy was treated when he was with Mr JH the P R C / ah tiong / FT (depending on which forum u found this link from), it was sad and whining and underweight, could see his ribs. Dane was not a fussy eater, he ate a lot while he was boarding at the shop. So the dog was clearly being underfed.

He has already been bought and collected by his new owner, the FT’s ‘customer’ and is now in good hands – his new owner is caring, knowledgeable about dogs and has a good home. Money is not the issue here and his new owner is willing to pay the financial cost to rescue this dog. Much respect for him, /salute.

It is more about the fraudulent nature of the advertisment. In the FT’s ad on 8 8 d b posted a few days after the adoption (since today it has been removed from the site): 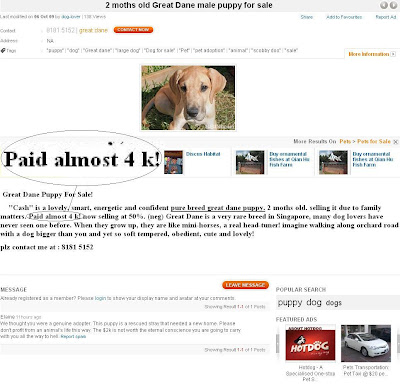 He claims he paid $4k for the dog. This is misrepresentation. When the press called the FT to talk, he claimed that Dane chewed on his cables and his mother was upset and made him pay her back for the damages caused by Dane. But this is likely to be untrue as Dane is not his first adopt-then-sell-for-profit case. Surely it cannot be the case that all his previous adopted dogs chewed on cables and needed to be sold to pay back for the wires. Also, dogs chewing on wires means that they lack proper training and toys to sustain their interest – also the fault of the ‘owner’.

The FT did indeed paid a price but it was an adoption fee (read right sidebar for reasons why there needs to be an adoption fee). The FT also got a free bag of dog food alongside the adoption. As to how the sum was calculated, I cannot comment as this is my friend’s shop the dog was boarding at. Big, pedigree dogs usually require a higher adoption fee than say, local kittens because – they eat more, they need more cleaning up after, they need proper nutrition according to their pedigree, they need more space to run, they need more supervision. And the amount of $4,000 is indeed quite reflective of the price of a licensed and certified pedigree GD dog (in fact all the information on the 8 8 db website – Scooby Doo, pony-size etc. – is what we shared with adopters about this breed of dog).

Angels Pet Shop does NOT sell dogs and cats. We use the shop to foster some of the animals we rescue, and only re-home disadvantaged animals as part of our voluntary work, which costs money. Most of the time adoption fees hardly cover it as some animals need veterinary attention. We do not intentionally go around looking for animals to re-home for a profit; we are usually approached by customers or members of the public, or the animals are found dumped outside the shop when Aswat opens for business in the morning. We do not pick up strays either unless they are found to be sick or very young or are actually abandoned pets.

As to why we allow foreigners to adopt, we do not discriminate; expatriates have adopted from us before and they do not make better or worse owners; it is the individual adopter that makes the difference. We have diplomatically turned adopters away before. This particular FT ‘adopter’ seemed well-off, eager, educated, and had the financial means to take care of a large dog. Normally keen adopters call many times regarding the animal; so did this FT. We also have a log book of all the particulars of the adopters, as well as encourage family members to come along to view the animals before adopting. So, on our part, I believe we have exercised due caution, which will be further improved in future when we implement a black and white contract as well as bouncer-type volunteers to help us do inspections on adopters, perhaps. We are still discussing this, and because animal rescue and re-homing is not actually any of our day-jobs we have to do this during our non-working hours.

As for how this Mr JH looks like, works, where and how to find him, I do not know entirely except these: he is in cahoots with his girlfriend E von (whose number is the one posted in the 8 8 db ad), we cannot ascertain where he lives because he has previously given fake addresses to other rescuers. He is dressed in a very wayang fashion as most P R C people who try to act atas are, has red-highlighted hair and wears brown contact lenses. He speaks with a honkee accent and claims to work and study in Singapore as well as worked overseas in Germany before. We do not know if all this information he shared about himself is true and valid; it is said that the devil is the father of lies, so, /shrug.

This story has attracted a lot of ah tiong haters as well as animal lovers. To the tiong-hatesters: I understand where you are coming from and in fact, I totally agree with what some of you have said that some are good, but most are not. I have a few tiong neighbours, only one of them is terrible: their kids poured soya bean milk on the stray kittens outside (Snowy, Nosey and their sister) as well as on our neighbour’s door. For the animal lovers, please learn a lesson from this case and do a written contract when you re-home a rescued animal, as well as spot-checks on the new homes, and trawl online classifieds to see if any of your beloveds are being re-sold fraudulently. We only knew about this ad because one of Angels customers told Aswat about it and then Andy and I checked it out.

And for those of you who feel that I ought to keep this under wraps – as lawyers do about ongoing trial cases – I understand where you are coming from, JH could be reading any of these stories about him right now. Yes, we are not law enforcers nor investigative journalists so we may not actually be totally diplomatic, politically excellent or give the alleged con-man the benefit of being innocent until proven guilty. Yet at the same time, had I not written and publicised this story a la viral marketing style, more would be kept in the dark about this, other people who cannot financially afford to be conned might be cheated by this scammer, and ultimately the animals suffer too. I reserve my right to be a citizen journalist.