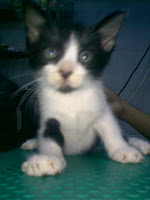 Little Seiko, picture taken with our old Nokia E71 camera before his adoption.

This post is potentially politically-inappropriate. Please do not read on if you are likely to be offended.

Little Salem and Little Sayang’s brother, Little Seiko, was adopted by a lady who lives in Choa Chu Kang. She is from PRC, and not the good kind, but the Jeff kind, which we didn’t realise till after she brought Seiko home.

When she came down to view Seiko, she had a few complaints. Firstly, she didn’t know that Seiko had a shorter tail than she would have preferred. Because of this, she wanted us to reimburse her for the cab fare she spent from Choa Chu Kang.

Subsequently, she asked that if she were to adopt Seiko after all, would there be a discount on the adoption fee of $30. Her reason being that she came from Choa Chu Kang. Little Sayang’s adopter also came from Choa Chu Kang, and was there the same day as she, and also paid $30 to cover the rescue and foster work we do for the cats. She asked Little Sayang’s adopter – the father – if he also ‘paid’ $30. He said yes, and willingly too because it goes to fund the boarding and feeding costs of the kittens at the shop.

She then said that actually she has another contact for kitten adoption, a cat similar to Seiko, black and white, and was going there that weekend to take the kitten for free. We asked her to go ahead and view that kitten, it doesn’t matter to us as any rescued kitten is just as deserving as those we re-home through Ubi Kuching Project. I also told her that she should go and view the kitten she mentioned before deciding anyway, as pet adoption should be a carefully thought-out decision.

Stumped, and still undecided – or upset about no discount? – about adopting Seiko, she then decided to just buy some cat food for her current cat instead and head on home.

When she handled the kittens, she gripped them with sheer force, and placed them down with even greater force. She also shouted at the kittens, in a bid to gain their attention. Edit: We repeatedly told her that kittens needed to be handled gently as they easily get scared. She did change tack towards the end.

She also asked that if Seiko was taken home, brought to a vet and found to be already sterilised (WTF? He was 1 month old at the time), can she return him back to us and get the $30 back. We said yes, because of course he isn’t sterilised! He is only a 1-month old kitten!

Anyway, finally she decided that, since she was already at the shop, she wanted to take Seiko home after all. She cuddled him – with force – and decided to name him Lucky. Edit: To be honest, it really seemed like she loved Seiko a lot on sight. It was just a different ‘brand’ of love, the China kind? She is our first PRC adopter, up till her, our expatriate adopters are from other countries.

Then she asked if she could get a free carrier for adopting him, so as to bring him home. A carrier costs around $30…

Seiko went with my silent prayers that he would be safe. Edit: This lady has a cat home too, which in the pictures she showed us looked well and happy at her home. This is one of the reasons why we did not immediately turn her away when she wanted to adopt Seiko, because she seemed to us that she was experienced in cat care, just a bit violent at the start.

And yesterday, this CB ah tiong woman said she wanted to return Seiko. Why? Because he developed a skin problem. Edit: She said she brought him to a vet and the vet said that this skin problem has been there for awhile, possibly since before the adoption. (Seiko was fine and healthy when he was with us). She wanted a full refund of the adoption fee and for us to go and collect Seiko from her house. Andy, who handled the call, said we cannot do that. She then said she will ask the police to handle this issue. Andy replied and said, “Ok then, come down and get the police uncle to come down too then we can discuss. OK bye.”

She called later, saying that okay, no police, and she will bring Seiko back to us, and maybe we can reimburse $10 of her taxi fare?

FYI, Jeff who adopted Dane also asked for taxi fare from Aswat. What is wrong with these PRC people that they cannot afford their own taxi fare?!

We are glad that Seiko is alive and that he is coming back to us.

Seiko’s adoption happened before the case of Jeff and Dane. We didn’t want to discriminate. Now we are going to. 道歉，你们回国好吗? 中国人没被邀请来跟我们零养宠物.