Today we visited Kendra and the dogs (Diana is only going to her new home tomorrow so she is still at the shop) to help give them a shower. Afterwards, I trimmed Kendra’s nails, cleaned her ears, and played with her. She really enjoys playing, and she wasn’t even afraid of the pups. 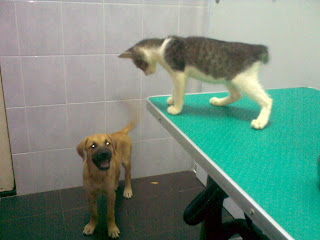 She seemed really keen on joining the siblings to play together, but being so small, we were afraid of her getting injured when pounced upon. So we introduced them gradually, by placing Kendra on elevated areas so she can sniff and paw at the doggies while they checked her out happily. Thankfully her nails were trimmed, so she didn’t hurt the doggies in any way. Likewise the doggies seemed to know that Kendra was a small kitty and that they had to be gentler. 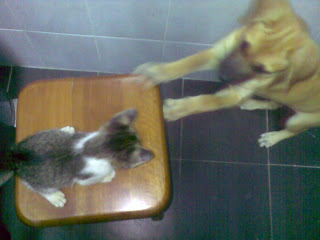 She seemed to be okay with the dogs sniffing and licking her! She is such a sociable cat. In fact, she really loves to play. She reminds me of Sayang, who loves to play and jump around, and is likewise also very agile. A cat like her will be toy- and attention-motivated. Here she is playing with the zips and strap of my pouch: 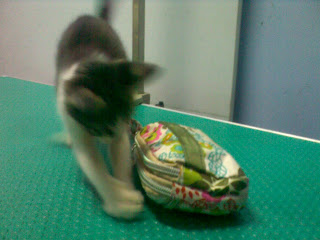 She enjoys being cuddled and purred in response, suckling my fingers too. When we left, she meowed her heart out, as if saying, ‘Don’t go!’ but despite that we had to go. We told her we will see her again tomorrow. Little Ken really knows how to steal our hearts.