Zoukie‘s legs – now that we can inspect him properly – are injured from minor scratches, possibly from bushes and other urban landscaping while he was on the run. He was suffering from dehydration – tearing eyes, stiff skin, dry skin patches – but was already much better today. Aswat also gave him a shower and groomed him today, and hopefully his dry skin will improve now that he received some first aid and skin care and is drinking enough water. He must really have had a hard time out on the run, but seeing him today was like looking at a different cat – he was much calmer, cleaner, healthier looking. Aswat also managed to train Zoukie to use the litter tray – who knows where his previous owner was training him to go. Aswat also managed to age Zoukie – he is likely to be less than a year old as his testicles are not that fully developed yet even though he is a large-sized cat.

No one has come forward to claim Zoukie as their lost cat.

But someone did email me today regarding Zoukie! Sam, who lives in Dover, saw Zoukie’s picture online and offered to adopt him if no one has claimed Zoukie. Sam used to have a Persian cat as his pet 10 years ago, and has been cat-less ever since.

So in love was he with Zoukie, that Sam came down to view him today. We wanted to bring Zoukie to sterilise next week and re-home him via our usual online channels, but now there is no need, because Sam took Zoukie home with him today!

If anyone does come forward any later to claim Zoukie as their lost pet, we will be forwarding the query to Sam, and the owner will have to bear the costs that Sam has already invested on Zoukie. But for now, Zoukie will be living happily with Sam. Seeing the look on Sam’s face and the joy Zoukie brought to him with the prospect of him going back to live with Sam, really cheered me up to no end. 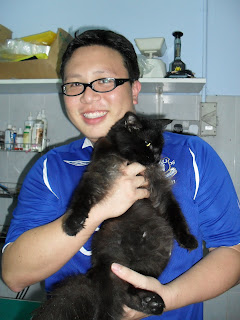 We have advised Sam to bring Zoukie for a check up just to get an all-clear as well as to get his sterilisation done.