Yesterday when we took a little trip around Zone 2 we found a cat that Auntie Rose has been talking about – a newcomer. Whom we highly suspect is skinny orange cat‘s brother as they both originated from Zone 2.

He is similar to his brother in character, very manja and sociable, and his fur is just as soft and thick. He differs in colouration in that he has splashes of colour – like a Seychellois cat – instead of a uniform cream with lighter shades on his underside. 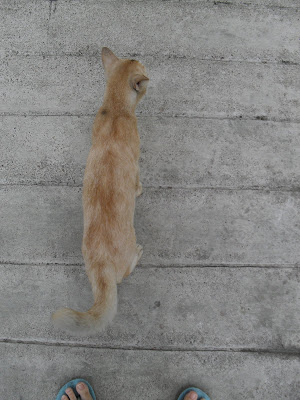