Doctor says her flu is likely viral. Hence it was prudent of us to have quarantined her and disinfected like crazy. She was prescribed antibiotics and a decongestant to be taken together with the chlorpheniramine. We were also given a bottle of vitamin syrup, containing vitamin B and other minerals to give to all the cats; ours for protection, Tikkie for recovery.

She also gave us an ear cleaner containing pyrethins for her ear-mites but Tikkie is still too young for ear-mite topical applications such as Revolution – the minimum age for that is 6 weeks old. When doctor cleaned out Tikkie’s ears she used almost 10 swabs…

Anyway Tikkie will have to recover first before she can go to a new home. I will need to buy more Dettol soon and come Monday Aswat will resume caregiving for little Tikus at the shop. Meanwhile, I hope the medicines take effect soon, she is still sniffling and sneezing and still confined in our ‘ICU’ i.e. the kitchen: 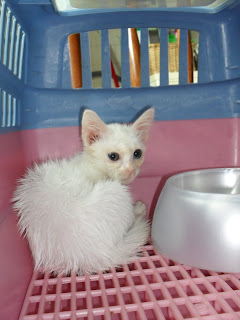 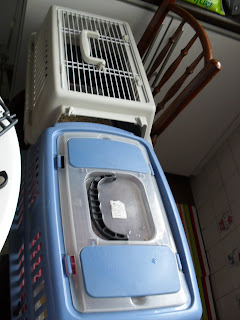 For lack of a pen at home we combined two carriers into ‘one’ for her to have space to eat sleep and poo.