There is one last white kitty at Angels right now. 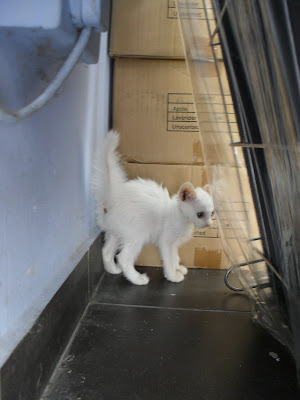 To share a bit on the story of this litter: the owner of the parent cats had financial difficulties in sterilising all of his rescued cats at one go. So, some of his cats are still not neutered, thus the resultant litter. We are helping him to sterilise all his cats one at a time by inviting him to join us on our joint neutering programmes we carry out for the cats in Ubi.

In the meanwhile, kittens resulted. The cats of this household have both Persian and Siamese genes, so the resultant kittens carry both characteristics.

The last kitty that has yet to be adopted is a white female, odd-eyed (blue / copper), ergo, deaf. She has recovered from the bout of flu she had when she first came to the shop.

Her fur is semi-long, single-coated. Think Balinese cats. She has Siamese features except that her points are masked, hence she is all white. Her behaviour is also characteristic of Siamese cats – active, loves human company, and loves to play.