This kitten, about three and a half months old, is one of two rescued by our cat feeder who also feeds in Aljunied. The kittens are weaned off their mother’s milk but they are incredibly scared of humans and thus hard to feed, and were living under parked lorries and inside a shacked-up looking building. Kittens need to be fed more than adults, at least two to three times a day. 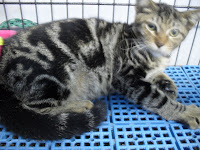 She is still a little skittish but is now open to human contact. Aswat has already found a home for her! Which if we had left any later she would have become totally feral and unsociable. As for her brother, Aswat himself has adopted him; he’s also a classic tabby, but red in colour.