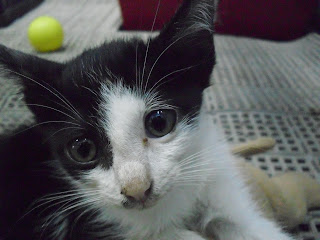 Our little black and white kitten (Salem the third) was adopted today.

He had already been recovering but is still skinny and slightly dehydrated – Aswat had been feeding him water using a syringe, and canned food mixed with moistened kibbles. I also fed him Nutripe and Natural Balance canned food today, mixed with Lysine (Vitamin B) solution. His third eyelid had receded but he still has slightly teary eyes and nose. He also has some ear mites which we discovered today. He was not actually up for adoption yet as we wanted to rehabilitate him first so he would go to a new home in good health.

Then I received this email:

…It has always been our goal to provide a home for a cat that might have lesser chances of being adopted due to age or health problems, as we don’t mind the extra effort of caring for such animals…

So I wrote back and linked our black and white kitty’s story to them.

The couple that adopted him today are expatriates from Poland that have been living in Singapore for a while now and are making Singapore their permanent home, which is when they went looking for a cat to adopt and stumbled onto our site. Their own cats back in Poland are living with their mom. They love cats so much they even specifically requested in their tenancy agreement when they first moved into their place in Punggol, to include permission to keep one cat at their home.

They absolutely fell in love with the kitten and bought all the necessary supplies. They will also be bringing him to the vet. They have named him Nen.

Little Nen fell in love with his new mommy too. He sat on her lap and became very manja, purring, blinking at her, claiming her lap as his new territory.

The cat feeder who rescued him also came by the shop by coincidence, and she was glad to see he was going to a good home. It was raining the day she rescued him, left all alone under that bridge near the Ubi ‘river’ i.e. monsoon drain.

I forgot to get a picture of Barbara with Nen on her lap – but we will be seeing them again because we had to loan them a carrier to bring Nen home. (They wanted to buy one but the large ones were out of stock and the small ones won’t be useful for when Nen grows up.) We are grateful that Nen has found a new mommy and daddy who will love him for life. 🙂