The family that adopted Shelley Daisy the Shar Pei pup (now called Dixie) recently rescued a newly abandoned kitten from the drain near their house.

It was a harrowing story of rescue. Dixie’s mom had heard a stray kitten meowing near their house for a long time throughout the day, and in the evening she went to take a look. The kitten was in a dangerous situation – he was trapped in the drain, flanked by the main road on one side and the monsoon drain on the other. A friendly couple of passers-by helped Dixie’s mom to get the trapped kitty out of the drain, using a plank of wood they found from nearby rubbish heaps. The kitty was scared as hell, and he nearly ran into the monsoon drain, but he jammed-braked in time. Dixie’s mom took the kitty home as it was late at night and Angels – the unspoken refuge centre for animals in Ubi – was closed.

They named the kitty Shadow, and promptly fell in love with him. The dad heard that Shadow was a rescued abandoned cat, and the daughter was cuddling him when their dad said, “Meimei, you like Shadow is it?” Initially, dad wanted to bring Shadow down to Angels to rehabilitate and re-home, but because Meimei said, “Yes, I love Shadow!” dad consented and the whole family adopted Shadow as their own.

Here he is, really handsome – 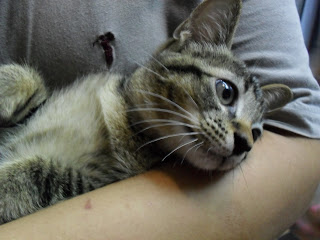 Shame on the people who abandoned him. He is a really adorable cat. Small in size, like a Singapura cat, with nice ticked and tabby fur.

And he gets along with Dixie the Shar-Pei!

We are so happy to hear of loving rescue stories like Shadow’s. Shadow has added a lot of joy to their family of 3 kids, 1 rabbit and 1 dog.