Ubi is a residential estate as well as a light-industrial estate. For Ubi strays, we have 5 independently managed areas within Ubi, each known as a ‘cat-zone’ and autonomously managed by different feeders and sponsors. When there are needs such as rescue work, trapping of cats for neutering or sponsorship needs in the various zones, Andy, Aswat and myself will assist the various cat-zones which are otherwise taken care of fully by the cat-patrons. 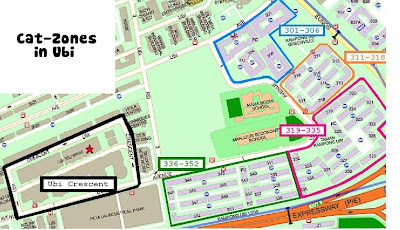 This zone is known as Ubi central, which is where Andy and I live, and where Angels Pet Shop is located – the only pet shop in Ubi. Angels Pet Shop at Blk 302 is the HQ where we board rescued animals for re-homing as well as stray cats recovering from sickness or injuries.

Auntie Can is the cat patron of this zone: she feeds the cats every night even though she is not even an Ubi resident, as well as sponsors the neutering in this zone. She also sponsors medical costs of any strays in this area that fall ill.

This zone is opposite Bedok Reservoir Road, along the Ubi river where many cats have dropped in, been thrown in by mad people, and drowned in as well. It has high human traffic, as the main bus stop where most of the buses stop at is at Blk 311 in this zone.

No cat patron. We usually tompang the cats from this zone into other zones where there are cat patrons sponsoring the neutering. This zone is currently the most under-managed.

This zone is large, and has good financial support from the cat patrons who are feeding – high quality food too! (Royal Canin and Innova Evo) – sponsoring and trapping the cats themselves.

There is however a particular group of cats who hide within the power station located in this zone. The patrons can only feed them through a feeding station set up outside this power station. All cats inside are not neutered but all the kittens borne inside this power station also cannot survive long. All other surrounding cats in the zone have been neutered.

This zone also has a lot of abandoned pedigree cats – Persians, Burmese, Siamese – the most ‘pedigreed’ zone in the estate.

This zone is nearest to the industrial estate of Ubi, and furthest away from the central. Auntie Doreen feeds the cats in this area, and the 2 uncles who sponsor and trap for neutering also help to feed the cats in this zone.

This zone’s neutering rate is slower than in zones 1 and 3 as the patrons are older and less able, physically and financially.

This zone is one of the industrial parks in Ubi and is managed by two ladies who work in that area. There is a large pack of stray dogs in this area that often attacks the cats. Jolene and Liana are neutering the strays in this area. Pakcik Hassan of Zone 3 also helps to feed the cats in this area during the weekends.

Rescue and Re-homing
For our cat rescue and re-homing work, Aswat, Andy and I work across all Ubi cat-zones to help disadvantaged cats such as the sick and the young. We hear about these cats in need mostly through word-of-mouth, or when we walk around the neighbourhood and spot them. Intervention can take all forms, from informing the cat-zone patrons and feeders to monitor, to first-aid, to fostering the cats at the shop, to re-homing the young.