Today we received a frantic call from our friends at NUS Cat Cafe – a student-run initiative that feeds, cares for and neuters the cats on the NUS campus.

They had a cat that was recently injured, suffering multiple cuts and wounds on his paw that had turned into abscesses. He was also not eating and drinking, and had become severely dehydrated. They brought him to the vet to get his wound checked out, and was put on IV to address his dehydration. They had then needed a place for the cat to board for 10 days, where he would need daily dressing change and medication. At present, they do not have boarding space for rehabilitating cats in their school.

So, 小杰 (Xiao Jie, or Little Outstanding) became Ubi Kuching Project’s first ‘self-paying’ boarding stray cat; the students that raised funds for his veterinary care have also put together some funds for his boarding. He was brought over to Angels this afternoon, alongside his medication and dressing. 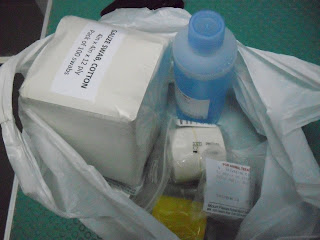 Finding boarding for 小杰 was tricky for the NUS folks because his bandage required daily changing, which meant more intensive care than any regular boarding customer at a pet shop. When Say Lin from NUS Cat Cafe came to us, he had already exhausted all other options possible to board 小杰 elsewhere. We managed to find a way to give 小杰 his own pen, and he is now resting at Angels Pet Shop where he will be for the next two weeks. 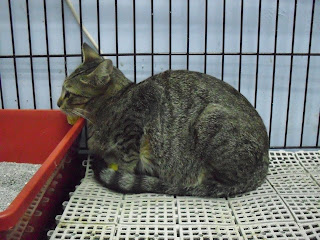 Even though he is sick, this cat is really docile and did not mind us handling him, although he looks awkward with his bandaged boxing-glove of a paw. 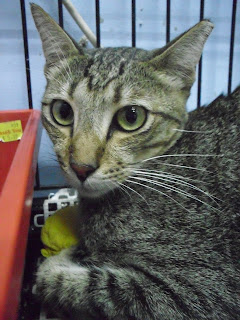 He is trying not to move too much, favouring his left foreleg instead of his right, which is all bandaged up. Aswat will need help with changing his dressing daily, because one will need to hold him while the other cleans and redresses his wounds. Hope Little Outstanding from NUS recovers really soon!