Aswat is the proud owner of six cats, three dogs, and too many birds, fish and small animals to count (which is a good thing, I say never trust someone in the pet industry who isn’t pet-crazy and well-versed in all kinds of animals)!

Two of his cats are nineteen years old this year, and are on the verge of passing on. Hence I grabbed hold of this one free Sunday I had in a very long time, to take pictures of his cats. 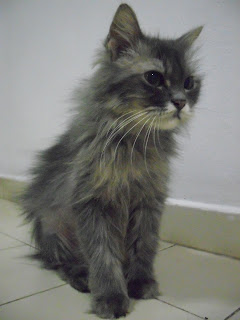 This is Pam, who is a beautiful blue longhaired cat with a white inverted mask. She is extremely manja, and loves to be rubbed on the belly, even drooling in pleasure when being stroked. Of late, she has become slightly incontinent, and also has been dropping fur like crazy; she is almost bald on her underside. I knew I had to take pictures of Pam as soon as possible before she loses all her fur and passes on. She is really adorable – 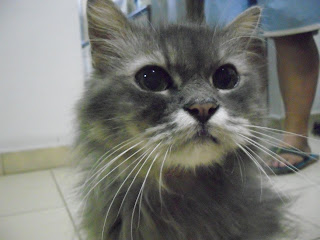 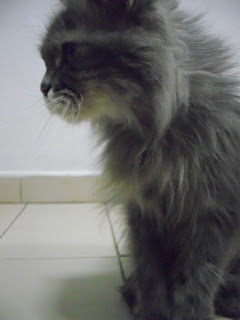 – and will be missed when she eventually goes. Am glad I got some nice shots of her tonight.

Pam was rescued as a newborn orphan kitten in Bedok, around the same time as Ana nineteen years ago, also an orphan. At the time, Aswat didn’t realise that they were to grow up to be longhaired cats. 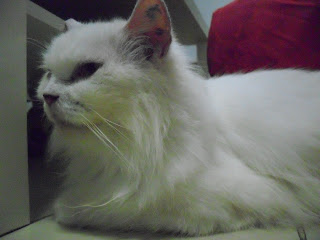 Ana is very much like our Slinky, hating hugs and often turning her back on us (which made it harder for us to take pictures of)! She also does not get along with Aswat’s mischievous male cat Bayou. Ana has a skin growth on her ear, and also a tattoo on her inner ear, as she was neutered from long before local vets issued vaccination certificates. She is deaf, as odd-eye white cats tend to be. Being old, she also cannot groom herself as much although she is right now in much better shape than Pam at the moment. 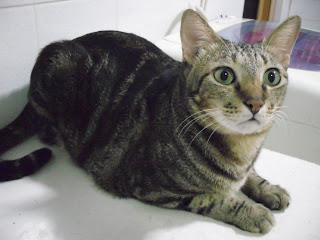 Bayou was rescued as an orphan kitten from Geylang, and has been dubbed the Geylang Gangster by Aswat’s mom, because he is really, really naughty! He used to bully Aswat’s cat Orket so much last time, which is the main reason why Aswat decided to re-home Orket because she was hardly eating and moving around much due to Bayou’s constant bullying. But we love Bayou! He is like a Bengal, with shimmering ticked fur, and black classic tabby markings. He always looks this innocent, but do not for a moment believe that he is truly innocent!

One of my favourite stories about Bayou is how he terrorises the small animals in the house. A couple of times, he snuck into the fish tank right after Aswat drained it to wash. He went in, all four paws of him, grabbed hold of a fish, and took it, flapping away, into the house! When caught, the fish was barely alive, and he looked really guilty. He also took out the turtles from their tank to play flippy-flip with. At first, Aswat was curious as to how his turtles ended up outside their tank, overturned. But he finally witnessed Bayou going in to grab the turtles using his mouth. So cute but so mischievous!

Bayou’s partners in crime are Sky and Wanda, the two latest additions to the family. Here is Bayou with Sky – 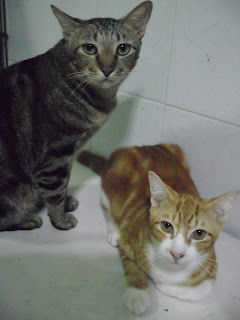 Sky, the only other male cat in the house apart from Bayou, was rescued by our Zone 1 cat patron Auntie Can, from a place she feeds in Aljunied. He is Tabitha‘s brother. 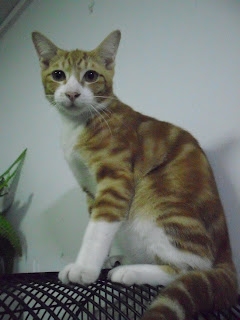 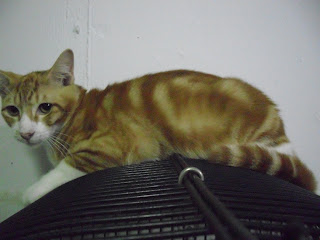 He is a handsome white and red classic tabby, with his red very deep, a prized characteristic acknowledged by feline fanciers around the world. We are glad he is off the streets, no longer hiding in that drain in Aljunied.

Sky really enjoys playing, mutual grooming and snoozing together with Bayou. Here are the two of them sitting on top of the washing machine / dryer, where they enjoy perching on. They are really close like real brothers, hanging out with each other all the time, perpetually sporting that ‘It’s not me I didn’t do it’ face – 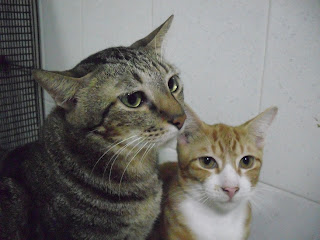 Wanda is from the litter that produced Sylvester and others, from a household that failed to neuter its cats. She is a longhaired Oriental, also known as a Javanese, because her parentage belongs to both Oriental and Persian cats. Although she looks really small in size, she is actually almost a year old. A toy-breed cat! Possibly because of the inbreeding among her parents, and the fact that she has Oriental genes. 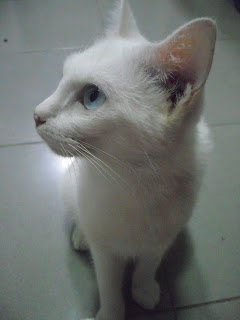 (I love this picture of Wanda, her eyes look so blue, and the foreshortening is superb!) 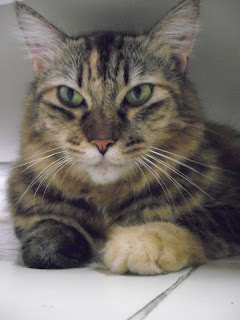 Another cute but really naughty one is this beautiful cat, who looks like a Norwegian Forest cat, known as Belle. Her nickname is Cucut, given by Aswat’s mom who fell in love with Belle when she was hand-rearing Belle from kittenhood. She is really beautiful, although also very shy, only enjoying her mother’s company. She is called Cucut because she likes to suckle on mommy’s clothes! –

Belle is the only one among the six who has this habit. When we first met Belle, she was so shy that we hardly got a chance to even see her. Now, we can hug her and stroke her, although she has that ‘I am just tolerating this you stupid humans!’ expression on her face most of the time…

After the visit to Aswat’s place, he then came over to ours to see Shiro and to play with our cats too. He managed to witness Scooter doing some simple tricks with his favourite treat. Present also was Wang Wang aka Skinny Orange Cat, now a resident stray cat at our block, hanging outside our house where our stray cat feeding station is. He sat outside our door, with Scooter on the other side of it, both cats nose-kissing each other. We also pored over our cat encyclopedia to discuss what Shiro’s colourpoints are likely to be, and decided that his colouring now conforms to a blue-tabby-point. A fun, catty evening!