Shiro is a high-consumption kitten! Don’t think that just because he is so cute, he is innocent! So far he has:

He really drinks a lot, I think more than what he did previously because we have already deviated from his mommy’s estimated feeding amounts and schedule – he is drinking more, and more often. 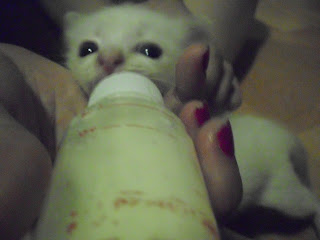 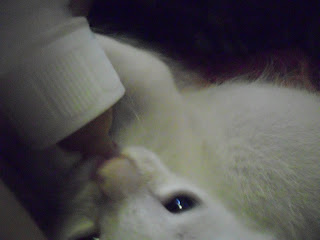 He is really growing fast; today he meowed to be let out of his crate just so that he could explore around the house. He can walk, albeit slowly and somewhat clumsily, which really shows how fast he is growing up.

The funniest thing today was when he wanted his milk but I had to go to the loo. I could hear him meowing outside the bathroom while I was in it. He also demanded his milk when I was printing some paperwork for our fund-raising, which meant it was either feed him first or print first, since I couldn’t do both at the same time. Of course I had to feed him first, he was meowing his heart out.

Not easy being a mother cat! None of my cats have parenting instincts – so no help there; they have merely sniffed Shiro, watched him (hands-off style) or batted at him. Slinky and Scooter have both slapped poor Shiro, although it didn’t hurt him at all – Shiro is so forgiving! Thankfully we just cut Slinky’s nails recently, she is the most violent slapper. I have also slapped Scooter in return. I guess I will have to make it up to the cats for their perceived ‘intrusion’ by giving them nice dinners more often while Shiro is here.

After a hectic afternoon of exploring the house, Shiro is now sound asleep, dreaming too, on my camo-net/sarong and cap, lying down next to me… 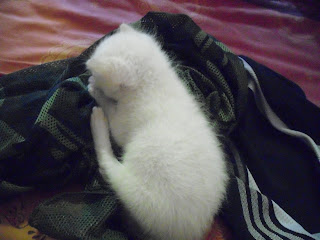