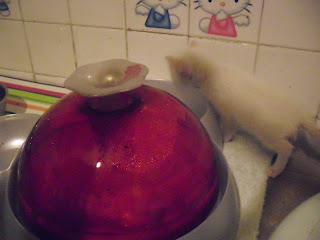 Shiro testing out the water at our fountain 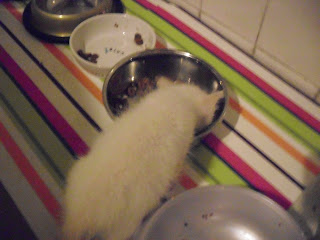 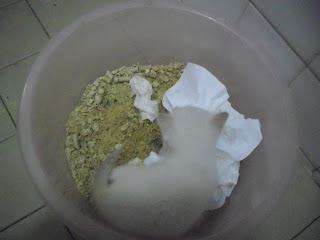 Shiro’s first litter box, with tissues inside used for rubbing his behind to make him eliminate

Unfortunately, he has also been shitting a lot, watery stuff; one accident has already occurred on our bed, oops! While kittens’ stool is usually not very solid because of their diet, it is still a bit worrying, but I guess I might just be paranoid. In their first two weeks, they will not poo very often, in fact once is two days is probably very normal. But now, it is a few times a day, somewhat like kittens after their first month when they are eating a lot of canned food and still drinking milk from time to time.

He is definitely going to grow up one vocal and playful kitten. It’s the Siamese genes talking! The good news is that he is so curious and outgoing, he gets along easy with other cats, loves humans, and is willing to experiment and accept dry food even at such a young age! Unlike our Scooter, who gradually lost weight when he first came to our house because he refused to drink milk or eat anything else but canned food, ha! As I write this, all four cats are hanging out in the kitchen, and they have finally begun to help me watch Shiro. Although a woman’s peripheral vision (the ability to see wide-angle) also helps me keep a lookout on him while he’s not in the room. I’d like Shiro to hang out more with the cats so he can learn the necessary skills like play-hunting, eating, drinking and going to the loo, something he does not have like a normal kitten with a mother cat to teach him these things.

With that, I cannot reiterate more that it is not easy being a surrogate mother cat, at all! In fact, it is not being a real mother cat either! Firstly, you have to deal with being the only bar in town for the kitty. Then, the father cat is of course not present so you have to do the caregiving yourself! Then, you have to follow them to the ‘loo’ all the time, every time, because they cannot go alone. It is no wonder so many kittens and young animals are euthanised all over the world, there simply may not be enough mother cats around, human or otherwise!

Fun fact: did you know that kittens, like most young mammals and even humans, tend to have rounder facial features just so that the male in the species will look more kindly toward them? That is why kittens and puppies look so cute, they have to be, so that they will be looked after. And that’s what Shiro is, so cute! I call this the Shiro-effect, where I cannot be angry or impatient at him for long even though he demands day and night attention while he is not sleeping. Speaking of which, I need to go check on him already…!