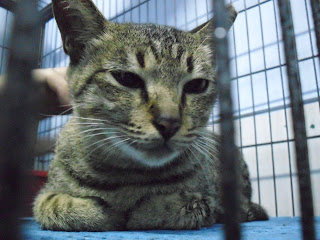 For some days Aswat and I have been speculating about Sookie‘s DNA (read about Sookie’s harrowing near-death rescue here). She has a short face, thick fur and her tabby markings are stronger at the legs and tail. Aswat guessed she might be partially Burmese because of her facial features but she is not Burmese in character – which is usually playful, very vocal and active.

After some research I reckon her type conforms to the Burmilla breed, which is a cross between Chincilla and Burmese – 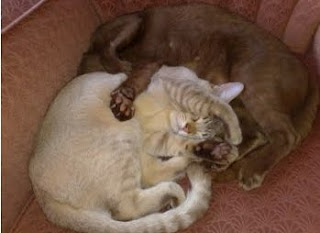 She not only conforms to the physical characteristics of the shorthair Burmilla – round face, short muzzle, she also has the breed’s character. She also looks exactly like one of the Burmilla pictures in our cat breed encyclopedia, one of a ticked tabby Burmilla.

Burmillas may not have colourpoints like their Burmese ancestors, and cats that do not have this restriction in the Burmilla group are known as the Asian Group. Something like how Siamese with no colourpoints are known as Orientals.

Sookie is still available for adoption. If you are keen to adopt her, please contact Aswat at 9337 8211.

In any case, we love Sookie all the same! If a suitable adopter cannot be found for her, she will be relegated to become a resident stray at Angels. (She is a much more helpful resident cat at Angels than Tommy is, she is willing to do product demonstrations!) At the moment, she is still scared of urban noise and is kept in her pen during the night, hanging around inside the shop most of the day.