A big thank you to Liana and Jolene who sponsored the neutering of these cats near their workplace in Ubi Techpark.

We had an interesting time today. Having to trap cats whom we have never met before was no easy feat. Also, the Techpark is not an easy zone to do trapping in. The population density of the stray cats there is low, which meant a lot of walking around on foot trying to find the identified cats, which took awhile. Good thing we had manpower on our hands so we could split up and search for the cats. There was a lot of meowing, a lot of squatting and looking under bushes and crates.

Thankfully, we managed to meet the cat-feeder of this zone; before today we never knew who the regular cat feeder was. This cat feeder lives in Zone 4 of Ubi and feeds the trays in the Techpark twice daily. We met her while she was feeding, which was a good thing, because this meant that we opened a line of communication. This way, she would now know about the sterilisation, and also that she won’t be seeing the trapped cats till the day after.

We managed to get hold of four males and one female. Three of the males are of the lot initially identified for neutering by the cat-patrons. One more male was found today, a very shy cat which the patrons have never met before, likely Tommy’s sibling. We also found a female cat who is very likely newly pregnant. There are probably more cats around in this zone, but the five trapped today is a good start!

My usual grab-and-place-in-carrier tactics didn’t work on this group of cats which I did try at first. In the end, Damy the expert had to step in with his traps, and I realised how we really are amateurs compared to Damy who is possibly the best of his trade, and the most humane too. He doesn’t really want to use nets, which is the preferred form of trapping by some other neutering service providers, because he feels nets may injure or overly-stress the cats. In the end we did leave one cat out because he eluded the trap too. But we caught his mate the female – 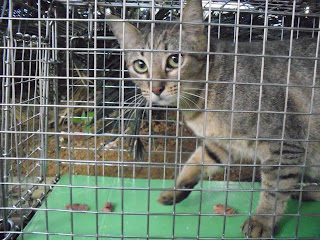 a really beautiful lilac tabby, who looks like Sookie too! This picture of her was taken when she was in the trap, which snaps shut when the cat has fully entered the trap. The corrugated plastic below is where the cat food was placed to lure the cat in. 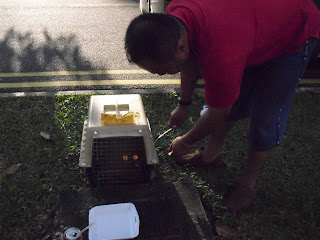 Damy then transfers the cats from the traps into carriers, which are extremely secure with acrylic sheets to prevent scratching attacks, and with cable ties too. The traps are then disinfected after, to make sure the next cat does not smell any other cat’s scent on the traps.

There was one cat we sighted that we did not trap, because he is firstly very old, secondly, possibly FIV-positive, because he has severe skin and coat problems, and a limp. On close inspection, I realise that he really does need some first aid treatment in the very least, to clean up his fighting scars and wounds. Damy advised that FIV cats will need blood tests before anaesthesia, and even then, if the cat really does have FIV, he may not survive the sterilisation surgery. Unfortunately for cats, FIV is not only transmitted during mating, it is also transmitted via cat bites when they are fighting. Another good reason to make sure your cats stay indoors.

Subsequently, we went to feed the remaining opened canned food to the cats in nearby Zone 4. More on that later!