Just minutes ago, I heard very loud meowing outside our house. It sounded like two cats about to get into a fight.

Looking outside, I saw two cats that have never before come to our feeding station outside our door. One of them was this cat from our zone, a male we call Gay Boy (because there was once some confusion as to whether he was male or female, ha) and the other is the newcomer to our zone who crossed over from Zone 2. If only he appeared earlier, we would have tried to get hold of him to trap for sterilisation. 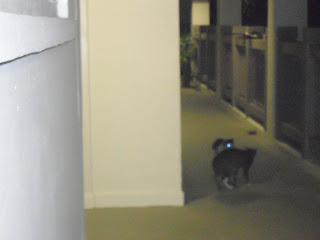 I threw some ice cubes on the floor in their direction to try and break up their fight – I use ice-cubes so that there won’t be any litter, and I make sure the ice doesn’t hit the cats, just near them. They startled, and stopped the meowing.

I guess Gay Boy was trying to protect us from prowling entire males who want to find mates in our area. Gay Boy has never come to our feeding station to eat before so I doubt it was a fight over food.

It is during situations like this when I worry that neighbours will get upset over the late night noises and start complaining. Thankfully they were outside a house where the family loves the cats at our block, including our own. And I hope Gay Boy and Newcomer don’t get into an actual fight elsewhere and get themselves all injured, because we might not be able to administer first aid in time if they do. Will check on them tomorrow…