A month ago we received two rescued newborns (found orphaned in Kaki Bukit) from Angels’ Royal Canin supplier who brought them to us because they knew we do animal rescue.

We had to put the two newborns with a foster mother cat we knew of in a neighbouring estate, because at the time we did not have the volunteer-strength to hand-rear them. SPCA-ing them meant a certain death, so we had to ask this mother cat’s owner if we could tompang these two kittens.

In return, we offered to re-home the mother cat’s other kittens as well, along with the two RC kittens.

The RC kittens arrived with their ‘siblings’ on Tuesday. There was 1 black, 1 one white, 1 tabby, and the RC kittens themselves were 1 tabby and 1 black.

This afternoon, the white one and the RC tabby have been adopted! Initially, they wanted to adopt just one, but kittens usually do better with companions, and true enough, the one they chose started meowing its heart out in loneliness in its box-carrier. So, this family from Jurong is now a proud owner of two new kittens! 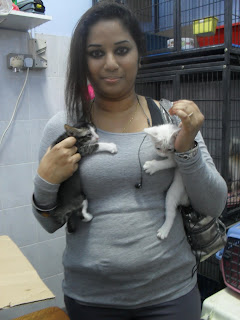 There are still many kittens available for adoption at the shop – Coco and Coffee, the two new black ones we call Rudi and Dino, as well as the new tabby. If you are keen to adopt, do contact Aswat at 9337 8211. 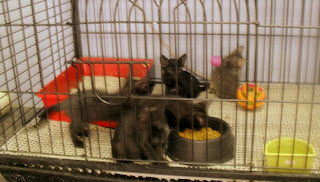 P.S. We ourselves are very confused because there are so many tabby and black kittens coming into our custody these two weeks… it be best if you visit them and see for yourself who is who…