We received a call yesterday asking for help about this poor kitty from a reader named Ivy. Initially, Ivy wanted us to foster this kitty and re-home him, but we are so full-house right now we couldn’t. So, I got Ivy to email us the kitty’s story so I can share it with all of you. 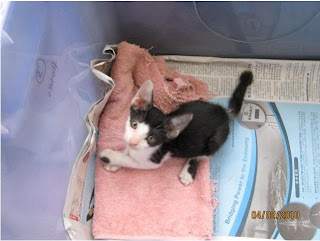 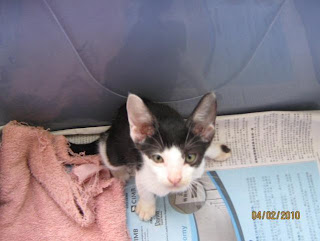 After speaking with her, we got an email from her with Looney’s story and information. In a gist, Looney was found orphaned at a void deck. He is now being fostered by Ivy but her own resident cat Missy does not get along well with Looney at all, and Missy is all stressed out. Ivy is hoping to re-home Looney soon as she has some more foster kitties coming in soon –

This is Ivy, I spoke with Aswat last night regarding the 1 month old black/white kitten who was crying over an hour at the void deck. I’ve snooped around but found no mama cat nor any passer-by who bothered to stop and look at him. I was worried the cleaners or dog-walkers would harm him so I took him in.

I’ve posted his adoption to CWS and am waiting for inquiries. It’d be great if you could also post his story on your blog… He looks really puny, so I’ve named him Looney the puny, lol. Bringing him to the vet this weekend for overall health check and de-worming. Poor fella has got a bloated tummy but eating and pooping well nonetheless.

I think this is a smart fella. I was cleaning his poop and he was doing those ‘scooping around to bury my poop’ actions, so i dumped in a litter box and voila toilet self-trained. On his first night! He’s eating dry and wet food and pretty happy to have whatever’s on the plate. I feed him Sava/Nutra Gold dry and Avoderm wet. Lil puny makes those ‘munch munch this is good stuff’ talk while chomping and it’s really fun to watch him eat. For the moment, Looney is quarantined in our dry and hardly used spare toilet shower unit just in case. Don’t worry, the space is well-cleaned and he zooms around with his toys.

We have a resident former-stray 2 year old cat. Sadly, she’s not taking too well to Looney. Missy lives in her own world, doesn’t seem quite interested in him but she’s been hiding in her cat room ever since he’s here. A sadder thing is that I’ll have 2 kittens coming to me in March of when I will do a very slow introduction to her. Doesn’t seem fair to stress Missy out with this sudden unexpected loud wailing kitten. I will try to foster him for as long as I can but it’s gonna be a messy situation when the 2 new kits come in March.

I hope somewhere out there, there can be a place for Looney to go home to. It’s tough being a stray cat here, even tougher to be a an ‘ugly-looking’ one. He’s a survivor and he just needs that one special human to look beyond his physical coat.

I’ve attached 3 pictures of him (same as posted on CWS) and will send you more later tonight.

Thanks Elaine, Andy and Aswat for your continuous efforts and I thank you on behalf of all the strays out there.

If you are keen to visit and adopt Looney, please contact Ivy at the number stated above or email her at mokoleee @ gmail.com.