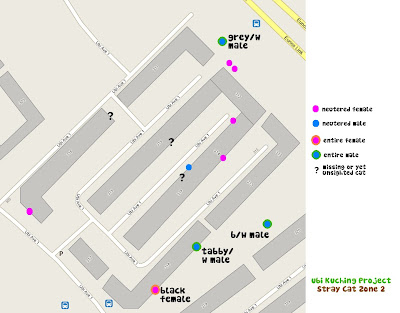 After feeding the cats in Zone 2 for the past few days I have decided to pin the location of the cats on a map (for a map of the whole Ubi’s cat-zones see here). I have given up on the cats that are long missing and disposed of by humans, and have only placed three points which I am still searching for missing cats. There should be more question marks but we will focus on those that are still around.

I think the next round of neutering in this zone will be the males which are a health risk to themselves (crossing roads to find mates), and also they roam around spraying urine on the first floor flats and shop fronts nearer to Zone 1, especially the cross-over cat who I see spraying almost every day. He is possibly trap-able using Damy’s cat trap. At least the good thing is that I see him every day, and though he is very wary and suspicious of humans (he needs a lot of blinking and no-eye-contact from humans before he will venture near any food you put out), at least I can sort of pinpoint his territory so that when the time comes we have a better chance of getting him.

I would also pin on the map the households that have knowingly thrown kittens away or dumped cats elsewhere but for discretion and lack of hard evidence I will refrain from doing so. (Welcome to Ubi’s Black Hole for cats, Zone 2. There are very few cats in this zone, now, no thanks to these humans’ efforts in helping us get rid of them.)

Feeding stray cats as part of the management of the feral cats in our community is actually quite enjoyable and therapeutic. Just remember that feeding should come alongside sterilisation, and don’t litter, if you do decide to do the same in your own community.