The cat population at Upper Boon Keng consists of a lot of pedigree cats. One of them that was recently culled was a seal-point Burmese kitten that was blind in one eye. We could never get to that little seal-point and regretfully he is now gone. He does have siblings, also seal-point, some chocolate-point. The parents are two chocolate point Burmese cats and of course some of the kittens are cross-breed Burmese. There are also other pedigree types, like a seal-tabby-point Siamese.

We are likely not going to visit Upper Boon Keng anytime again soon because the cat feeder at the adjacent block of our feeding point decided after all that she is going to feed the cat population where we go. Also, we had discovered and linked up with another cat feeder who feeds the pathway that flanks the CC, from who we found out that the Boon Keng feeder that has been passing rescued cats to us actually has been rescuing cats – from the same place! There will be still however a need to sterilise the cats there and if sponsors step forward we will still step up to help.

On Friday night we managed to trap one of the Burmese/Siamese kittens. She is healthy and is currently being rehabilitated – toilet trained, showered and groomed, and socialised. She is available for adoption on Monday. She is a chocolate point and has green eyes and is about 10 weeks old.

Here she is in Ubi Kuching Project volunteer Tity’s home where she has been given a pen and litter tray of her own. 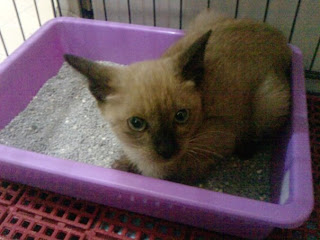 Despite being Himalayan this gal is quite docile and not that vocal compared to most other Siamese and Burmese. Regardless, her colourpoint and colouring is true to the type of the Himalayan gene and she really is a beautiful kitten.