Squirrel, one of the mother cats from the streets of Bedok Reservoir Road, has finally given birth today! 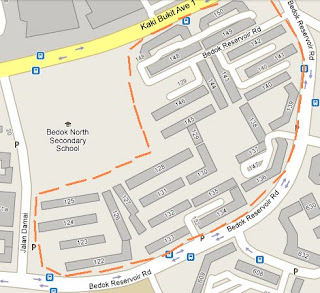 The area in Bedok Reservoir, where cat-patron Felicia is the sole feeder, and trapper and sponsor for sterilisation of the stray cats

A little bit more about the place we rescued Squirrel from. Felicia, the sole cat patron here, has been diligently feeding and sterilising this area of cats. But last year-end she received an influx of cats being dumped in her cat-zone (see map above). She couldn’t cope with having to feed and sterilise so many more cats at once, and two of the cats had become pregnant. After meeting up with Felicia, we promised to help her re-home the kittens after they were born and weaned, and help her tao-kar-chiu (lend a hand) with the trapping when she raises funds and plans the next sterilisation programme for the stray cats in her care. In the meanwhile, we felt the pregnant cats were too late to undergo abortion and Felicia took one pregger cat home, us the other, Squirrel. The mother cat now at Felicia’s own home had given birth around the same time we took the cats in, and the kittens now about a month old. We want to help her to foster and re-home the kitties but we have no space at the moment.

When we first brought her back to foster her through her delivery, she was about one month pregnant, but we thought it was much later in the pregnancy because she was so huge. We made plans for the cats – we would foster Squirrel through her pregnancy, birth and weaning and thereafter cat-patron Felicia was to take back Squirrel and one kitten, Squirrel to be sterilised and moved to Felicia’s other property.

Today, the birth was easy but Squirrel does not seem very experienced as a mother, possibly she was abandoned on the streets when she was on her first heat and this is likely her one of her first few pregnancies.

Anyway, Aswat felt her Squirrel’s tummy when she was staying with us, estimating there to be four kittens. True enough, today, four kittens were born, but one tabby kitten passed away right after birth.

We then brought over the three orphaned kittens we rescued last night from Upper Boon Keng, and tompang-ed them with Squirrel, who took to them readily. So Squirrel is now nursing 6 kittens. You can see from the pictures taken here by Andy that there are some bigger kittens – those are the Upper Boon Keng orphans. The tortoiseshells look black here but will turn into beautiful mixed-Persian torties. 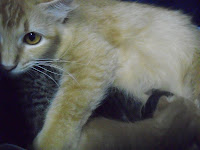 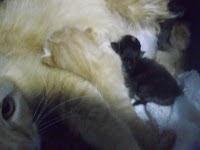 As for the three orphans – Skater, Sunshine and Spot – last night I stayed up all night to feed them while they were at our house, and in the morning (I fell sick, sheesh) I woke Andy up to take over the day shift. The kittens need to be fed every 2-hours for these first two weeks of their lives, but I timed it 1.5-hourly because the Cosi milk is less nutritious and filling, and because they have been starving the whole day we wanted to feed them through smaller and more frequent feedings. We are so happy Squirrel gave birth and can now help us in return for the shelter we have given her for the past month! At least tonight I can sleep…

Likewise, none of these kittens will be available for adoption until they reach partial weaning and have begun solid food. This will be in about 3 weeks’ time for Skater, Sunshine and Spot, and 4 weeks’ for Squirrel’s own kittens. As for the other mother cat from Bedok Reservoir, we want to take her kittens in too but we are too full-house at the moment and will have to wait till the kittens – Orange-gal, Coco, Coffee, Cammy, Shine and Tricoloured – get adopted.