Today I went to feed Zone 2 again but didn’t manage to spot any-cat else from yesterday, except for this cat we call the Japanese cat (after the Japanese Bobtail). She hangs outside a feeding station at a first-storey flat at Blk 316. She is neutered and Andy and I love her colouring, the perfect amount of red and black on white. 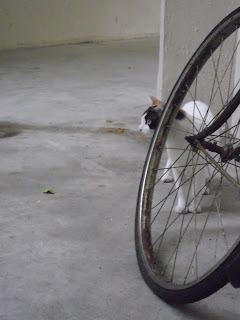 She came to where I was, behind her feeding station, because she saw this guy eating from my bowls of milk and kibbles (he has roamed from one end of Zone 2 to the other today). She came to investigate him, inadvertently chasing him away, and then helping herself to some of my food – 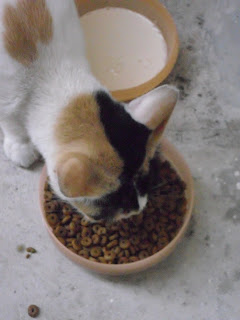 I am beginning to think that the Zone 2 situation is not as dire as it was before, simply because most of the cats are already gone. It seems that the remaining cats are mostly sterilised. We only don’t know if the missing cats were killed, or dumped somewhere else other than Ubi. If we can only intervene in time before the killings or dumpings occur. But the cat population is currently very small in Zone 2 albeit through cruel population control efforts by anonymous residents. The main thing now is to keep tabs on the cats in Zone 2 more closely than ever.

I have lost count of the missing cats. They are like ghosts, stray cats that no one knew much about when they were around, and now simply gone; talking about their disappearances seems like merely harping on urban legends that cannot be proven. All we know are stories of witnesses seeing cats being thrown off high-rise flats, or sealed in boxes, or kicked into monsoon drains. We can’t always be there to see these things happening, we just know that they do. For now, I will try to visit the cats as often as I can and report on them so we can find a way try to stop these things from happening.