We had 3 newborn kittens brought to us two weeks ago, rescued by some Ubi residents who worked in Changi South(which is where the kittens were found orphaned).

These 3 kittens have been hand-reared in one of our volunteer’s homes and have been named (from left) Tammy, Tinky and Twinkle. 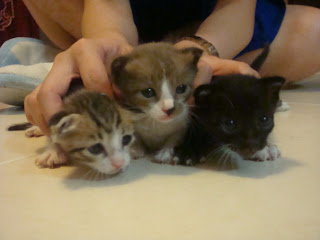 Recently, Tinky fell really sick. She was brought to the vet and the vet advised that Tinky be put to sleep because of brain damage, which we believe to be likely genetic. Regardless, Aswat advised Tity (our volunteer fosterer who also paid for the veterinary bill) not to euthanise Tinky, and after intensive care from us now Tinky is still alive and well in Tity’s home.

Regarding this issue, Tinky, Twinkle and Tammy’s initial prospective adopter who had agreed to adopt them once they were weaned off milk, had become very lukewarm about adopting the kittens, and because of this, we have decided to put the Changi 3 up for adoption again in search of genuine adopters. Fosterer Tity has decided to adopt Tinky, the sick one, so Twinkle and Tammy will need new homes soon.

They will be starting on solid food in likely a few days’ time, are currently on a mix of milk and baby food. Once they have learned to eat kitten food without hand-rearing they will be available for adoption.