The six cats we trapped on Tuesday evening have returned to us today.

We have released three of them. All the girls were pregnant, even though they are so young. It’s a good thing we got them neutered sooner rather than later.

Three of the cats are still boarding at Angels, are those that hung out closest – or inside – the bicycle shop that evicted them, to which they can no longer return. Silver tabby girl is still groggy, but the black and white girl is already ambulatory. 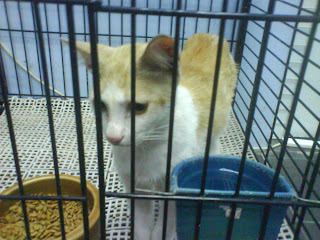 Yellow, before he was neutered (his ear is now tipped) 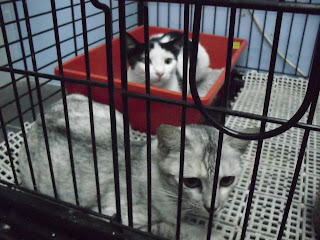 The two girls before their abortion, spaying and ear-tipping

We are hoping to find new homes for these three because returning them to their original territory is now impossible. If nobody comes to us to adopt them, they will be released outside Angels Pet Shop where they can feed and water at during the day and roam the area outside the shop at night.