Edit: The outlines on this map are probably inaccurate because this was drawn up from secondary information I gathered. See a later post here to gain a more accurate orientation of the area and where the overcrowded cat areas are. 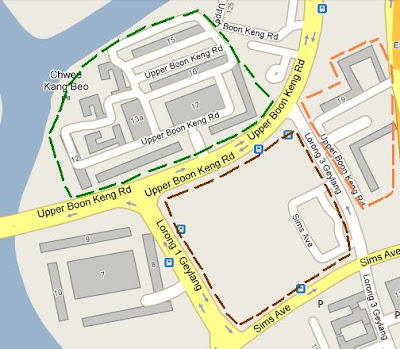 Last night Aswat and Ivy went to Upper Boon Keng for a feeding excursion, tipped off by some news that Ivy has been reading about the stray cat situation there.

They were quite taken aback by the cats they saw there. There were at least eight newborn kittens, some of them blind, and many skinny cats. There are some pedigrees there too, possibly runaways or abandoned cats.

There are two feeders in this area, one they met last night, another that is in Aswat’s social-cat-network. One feeds at blocks 19-20 where there are some shops and a dialysis centre, another is at blocks 15-16.

The area outlined in brown is apparently where some factories are and the situation there is most dire.

The other parts are not being fed. There is also no sterilisation being done in this area. And no rescue either.

We are quite full-house on the boarding front so we are making some arrangements to find foster homes among us to rehabilitate some of the cats that can be saved. If you know anyone in this area that is keen to help, it would be good if you link us up with them. This way, we can, through communication, find a way to pitch in and help the cats in this area. They will need to be sterilised, some sent to SPCA, some rescued ourselves, and more feeding needs to be done so that the cats on the verge of sickness don’t malnourish and fall sick too.

We will be finding some time and transport to go visit Upper Boon Keng again soon. If you are keen to join us, do let us know. Likely we will have to take a cab there unless someone with transport volunteers to come along.

Meanwhile, I have also written in to CWS about the situation; if they are already on the case we can chip in to help, otherwise a link-up with any carers there or volunteers who would want to help.