LY went home today to find out that someone had taken one of the newborn kittens in the estate – whereabouts unknown – and dumped her at the guard house. Apparently the kitten had been dumped at the guard house for the whole day, and the security guards had waited for LY to come and claim the cat instead of getting their pest-control to take it away.

Having no idea where the mother cat is nursing her litter, and nowhere to get pet milk replacement from at this time of night, I had LY bring the kitten to Angels where we have our current supply of pet milk.

She is really weak, unable to drink much milk, and having a bit of flu’. She was hardly meowing, had tears around her eyes. I nearly thought she was dead on arrival, but she was alive!

We tried to see if Squirrel could foster-mother her but the kitten was too weak to latch on to Squirrel, and when she had started sneezing a little, we worried for the little ones still being nursed by Squirrel.

So the little bundle of fur is now at our house, where I hope she will eventually take to being bottle-fed and survive the ordeal. 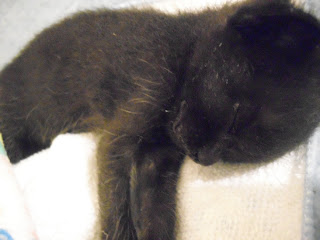 I just fed her again, this time with a teat-ended bottle. She seems more alive now, and drank more than the few drops she did just now, so relieved. Little Bun-bun is probably about 2 weeks old at most, her eyes are opened. Will be staying up late to feed her again in a couple of hours. Here come the sleepless nights…!