Michelle who works in Ubi Techpark, with her mother who feeds the kittens around the Excalibur building, informed us that there were two litters of kittens around the area. They were doing fine, but the management of the building had reacted and NEA came down to warn the feeders to stop feeding. The management was on the verge of calling AVA down too, and Michelle has already had to bail some cats out that have been trapped.

We have linked Liana, one of the Ubi Techpark neutering sponsors, to liaise with Michelle so that they can bring the two mother cats and possibly yet unsterilised males for neutering soon.

In the meantime, we tried to rescue the two litters of kittens. We didn’t manage to get three out of the seven kittens there. 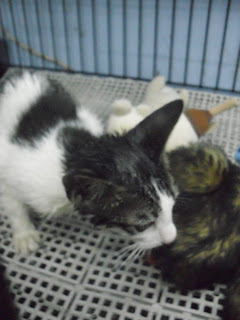 Those four that we did, we brought them to Angels to rehabilitate and board. Aswat is still blind in one eye but he is braving it to be their primary caregiver. While he set up their boarding pen, the rest of us set out to bathe and de-flea them –

I will take more pictures of them again soon when they have settled down and are groomed again.

The kittens are healthy, and are about 7-8 weeks old, females, three of them white and tabby, and one beautiful tortoiseshell.

They will be litter-trained, dewormed, and socialised while they stay with us, and are available for adoption. Do visit them at Angels Pet Shop to adopt these girls.