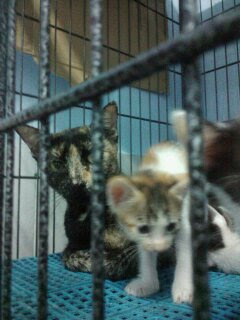 This beautiful mummy cat was bailed out from SPCA by her feeder in the far end of Ubi Techpark, when building management had called them to remove the cats from their territory. She is now penned together at Angels with her litter of 6 one-month old kittens, all girls save for one boy called Othello. She is a really vocal and greedy mommy cat, and she is still nursing her kittens.

In the meanwhile, we tried to get the kittens to start eating solid food and get used to using a litter tray. They are all already doing that now, thus, they are ready for adoption soon, preferably after they are weaned off milk more so they can grow up nice and healthy. I will be getting pictures of them when I next can visit them at Angels. Othello is black and white, his sisters are either tabby, white with cream point, tricoloured.

As for the mother cat, we probably will have to plan her future for her – sterilisation after weaning, then find a safe place on the streets for her in Ubi or persuade the cat feeder to find a home for her, hopefully his own. Adult cats are almost impossible to rehome, so if there is no home for her, streets of Ubi it shall have to be.