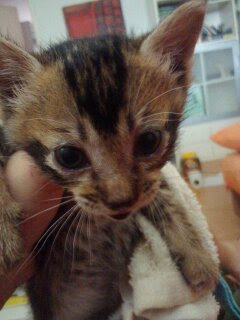 This is Spitty, named as such because he spat at me when I went near him yesterday, inevitably very emo because him brother had been just been adopted.

Spitty and his brother’s story is that both of them were dumped outside Angels in a cardboard box yesterday. Aswat, sighing with his heart wrenched, had to find a way to pen them and rehabiliate them for re-homing. At first, he tried to put them with the mother cat with her litter of 6. Mother cat rejected them, slapped and bit them two, refused to let them suckle, or even her own kittens to go near her. So we had to pen them separately. They are about a month old so they are able to eat on their own.

Unfortunately our boarding situation is more than full now, so Aswat had to place them in a carrier. We managed to rehome Spitty’s brother the same day. Then I brought Spitty home to rehabilitate him and allow him to stay in our kitten pen, a better option than a small carrier, just a bit too crowded.

He had suffered from some teary eyes after being hit by the mother cat, so I medicated his eyes, and in case it was sickness and not irritation from being slapped, gave him vitamins too. His eyes stopped tearing today after a few applications of Terramycin, medication donated by Bun’s adopter. Bun and Spitty get along together well. But yesterday Spitty got so upset with the dumping+moving+medication+loss of his brother that he spat at me so much and nearly attacked me. Andy used a catnip-marinated towel to cover and hold him to calm him down so he could apply his eye medication. Catnip is God’s gift to cat! He calmed down and then today, no more spitty, just hissy, and meowing a lot possibly for his brother, another reason why kittens should be adopted in pairs if possible.

His eyes have recovered and he is undergoing a socialisation process now, still needs to be dewormed, and will soon be ready for adoption.