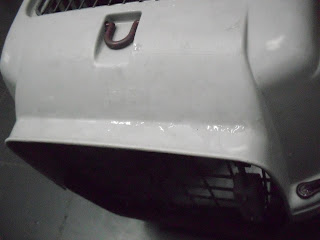 Today Andy came home from work early so we could start our stray cat trapping before sundown, and as it turned out, before the rain started.

Setting out from home

We initially budgeted for the strays in Zone 2, but it turns out that there are cats in the fringe areas of Ubi – blocks in between cat-zones – that no one is sponsoring for neutering, so we had to stretch our budget for those cats too. We will have to plan more fringe-areas-of-Ubi sterilisations in future when we can raise enough funds to do these areas, today is just the tip of the iceberg discovering that there are so many more unsponsored cats in Ubi.

So we caught one from fringe area of Zone 4, the mother cat with kittens having conjunctivitis. The kittens are doing better, by the way, although we can’t manage to get hold of them to medicate daily.

We brought her to Angels and then set out again.

Setting out again from Angels

We then caught the gangster cat that has been causing complaints and cat fights. His territory is very big, being an entire male cat, spanning from Zone 1 to near Zone 3. At first, we wanted to catch him using a homemade trap –

But in the end, I somehow managed to just grab him and Andy helped me push him inside the carrier. He has been such an elusive cat even though I have fed him a few times before (he is the ‘crossover’ cat if you click that link). Amazingly, I didn’t get bitten or scratched, I held on to him so tight. The feeling of satisfaction in catching an elusive, hard-to-trap cat is amazingly invigorating!

Afterward, we had to be very careful because he is such a feral guy that the carrier mightn’t be able to hold him – his paws were already stretching outside of the carrier to try and get free. I placed his carrier inside Aswat’s dog pen in the shop before Aswat cable-tied his carrier to secure it further. Here I am talking to him –

Afterward, a cat feeder feeding at Blk 336 – considered a fringe area too, no one is sponsoring neutering there – brought two of the most problematic cats from that block to join the rest of the gang going for neutering tonight. Likewise, a new cat in Zone 1 was brought over by a resident, another unexpected target for tonight’s neutering, we can just barely afford to do him too –

He has been fighting with the other cats in the area, all sterilised, so he is a necessary cat to do. Thankfully, male, which costs less. Otherwise we might have had to turn him away, poor thing.

Also coming are residents bringing their pet cats to joint-neuter with us, their two cats are actually Scooter’s sisters, already one year old, more than overdue to neuter! At least they can help to cover part of the transport cost for tonight’s strays, and there will be no incident of ‘accidental’ births in that house, which is located in Ubi Zone 3.

We are now awaiting Uncle Johari who will be catching hold of Thamby who is being ‘kept’ by a first floor flat owner that refuses to cooperate in sterilising her. They feed her and allow her access to their home, but when Uncle Johari and Auntie Rose talk to them about neutering her – they constantly take her kittens and throw them away – they will scold the feeders saying that sterilising is a sin. What irony! Hopefully Uncle Johari will be successful. He is also going to try and get hold of Bread, Toast and Teacup‘s mother. Then Damy will arrive at 10pm to collect them all. Job done for now, till the cats return day after tomorrow.

And – fingers crossed – we have to pray hard that none of the cats get into any surgical complications, because our funds are dry from just sterilising this lot! We are back into deficit!

Update 16 April: Damy got a bit of a shock when he came to us at 10plus last night, thinking ‘maybe two or six cats?’ but we greeted him with nine! Damy is going to get an earful from the Geylang East vet when he appears today with the lot!